Witness Intimidation In Barbados: Was Mercedes Van At Home By Accident – Or For A Sinister Reason?

This must and will stop.

Does Being Married Really Matter Anymore?

Marriage matters or it doesn’t. Why should a man bother? As some comedian once said, “The next time I want to get married, I should just find a woman I don’t like and buy her a house.”

Mrs. Sinetta Willner (otherwise known as “Sinetta“), her mother and Mr. & Mrs. Willner’s two adopted children will be spending Christmas with Simon Cowell in Barbados. Mrs. Willner is telling the tabloids that she has always been, and is still in love with Mr. Cowell. (Story links here and here)

Mr. Wilner will be in Hong Kong. Mr. & Mrs. Wilner are still married.

Should I care? Should the world care? Does it matter?

And if it doesn’t matter, does marriage matter anymore? Should we just forget about marriage and let the chips fall where they may?

As a still-healthy man who is long past the desire to start a family, part of me says  the days of “shunning” adulterous couples are long, long gone. Yet another part of me says that the big losers in all this dethroning of marriage are women.

Why buy the cow when you can enjoy the milk for free?

Cowell obviously agrees and tells the press he’s just out for a good time.

This is not an article that is critical of Jodie Kidd or her family in any way. God knows the Kidd family have done many good things ’bout hey not the least of which is the festival at Holders. No, I haven’t been, but it has also been a while since I’ve had a gin and tonic at Sandy Lane or at the polo ponies for that matter. (wink, wink – nudge, nudge)

Anyways, I read that Jodie (who is now a “B list” rather than “A list” celebrity) is doing something to help save Europe’s beaches through the Corona Beer “Save The Beaches” campaign.

And yes, they mean Save the European beaches.

As Jodie told the press: “I grew up on the beach in Barbados and I spend a lot of time on British beaches and beaches all over the world. I have noticed the amount of s**t that gets washed up on them and I think this is a great campaign to sort them out.” (Metro article here)

I think an upscale, filthy-rich society babe like Jodie meant to say “stuff” or “waste” on the beaches, but I digress…

We Have So Many Celebrities In Barbados – Can We Have Some Say A Few Kind Words To The World?

Barbados must have more rich celebrities per square inch than any other place in the Caribbean. Why, hardly a day goes by that some Google alert doesn’t come in saying that this famous and/or rich person is in Barbados or headed to or from or cheated on their spouse there. With that kind of a pool of prospective endorsers, I have to ask why we don’t see our rich and famous folks making more frequent and positive statements about Bim.

Perhaps the government could approach some rich and famous folks for a few “I like Barbados” statements? Heck, when they get into trouble in their home countries with drugs or drunken driving we never refuse them entry here. Barbados should be asking for some quid pro quo!

Now… where is that gin and tonic darlin’? Is my polo pony ready? Damn, I’ve spilled my drink all over keyboard. I hope it doesn’t a;slji asdklpoiu, e;lk dadc i as;lkn234oikhcc,m asc ,  adosicp8ukjwerl,d, 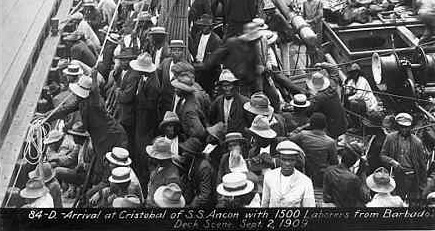 Bajans arriving in Panama aboard the SS Ancon - September 2, 1909

“The Silver People Chronicle” Documents So Much Of Our History

Back in March of this year, we at Barbados Free Press delighted at our discovery of Roberto Reid’s blog The Silver People Chronicle – about the West Indians who built the Panama Canal. Until I found his blog and did a little more research, I didn’t know that the majority of the black workers who contructed the Panama Canal were Bajans.

In his latest series, Roberto tells about how unemployed, used-up, ill and injured workers were sent back to their original countries with cooperation and funding from the United States.

Well worth your time.