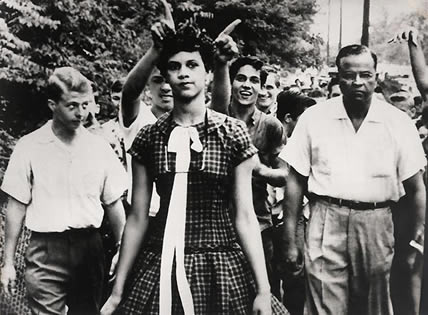 The Long Walk Of Dorothy Counts Comes To The White House

A black man named Barack Hussein Obama is now the President Elect of the United States of America and, unlike some previous elections, there is no doubt that he was truly elected by the majority of the people. At the time of this writing there is a six million vote spread between Obama and McCain. Yes, the numbers during the campaign were close, and the people of the United States were poorly served by a disgusting news establishment that has for the foreseeable future lost all credibility (more on that in a few days) – but the end result is no squeeker.

Barack Hussein Obama is truly the choice of the majority of citizens.

In all of our celebrations that a black man will be President, we should not forget that this historic moment did not start with Barack Obama. Neither did it start with Martin Luther King’s assassination nor even with the emancipations of the 19th and 20th centuries in various countries.

But there are road markers along this journey towards freedom and equality for all – and Dorothy Counts is as good a place as any in history to make a comparison with a black President Obama.

In September of 1957, a 15-year-old Dorothy Counts became one of four black students to be accepted at Henry Harding High School in Charlotte, North Carolina. She lasted only four days in that hell before her parents pulled her out.

As she walked into school on the first day, her back was soaked with spit and her legs were bruised from rocks thrown by white students. The “good ‘ol boys” also took care of any white students who dared to support and befriend Counts.

That was North Carolina in 1957. A short fifty-one years later in 2008, Barack Obama stood before the world to make his acceptance speech. Things change. Barack Obama is the evidence of that ongoing change- not the reason it happened.

Barbados Free Press declared our support for Obama almost from the start, and in the middle of the Obama – Hillary! runoff for the Democratic nomination, we declared that Obama would be the next President of the United States. We’re hardly magical with our predictions because with Barack Obama a blind man on a fast horse couldn’t have failed to see the victory that was coming.

We felt that victory months ago, but we also said that all this excitment over a black President would soon give way to the fact that Barack Obama’s policies with offshore banking and taxation are distinctly hostile to the interests of Barbados. Black majority nations are going to be very surprised if they think that President Obama will place their interests over the interests of his country.

Still, the image of the United States has been changed overnight and that change may help on many worldwide fronts where the USA has assumed responsibilities or powers in situations it has no right sticking its nose into.

For a moment today I thought they were going to steal the election from the people. Who are “They” ? I’m not sure who “they” are. I’m not even sure that they are republicans, but when the reports started coming in of voting machines “forgetting” the presidential candidates’ names, and riot police suiting up in anticipation of a McCain victory, I wondered how this day would end.

In the end, “they” were not able to sabotage or steal election. They will now turn their efforts into discrediting and disrupting the Obama Presidency, but that doesn’t matter now. The event has happened and cannot be put back into the bottle.

Whether Obama will be a good President or the worst the world and America has ever seen is unknown. In the context of the change that has happened, Obama’s performance almost doesn’t matter. The next President may be white, SHE may even be of Mexican hertiage. There will be other black Presidents after Obama.

The important thing to understand is that a black President of the United States is just one more sign post of hope along the journey. Relations between the races are getting better every day. Obama is evidence of that.

Now, if we can just bring some of that progress to Barbados…

35 responses to “President Barack Obama – Not A Bloodless Revolution”