Obama Kisses White Women – What Would Happen To A Barbados Politician Doing The Same? 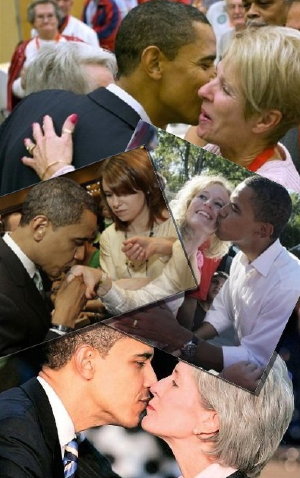 I came into the kitchen last week to find the girls oogling a photo of Presidential candidate Barack Obama on the beach and making a joke that went something like “Ohhhhhhhhhhh – Baam – meee!” and maybe a few other little comments that I shall not (read “cannot”) repeat here. 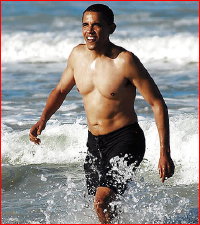 Well, ok. It’s not like he’s Magnet Man or something, but Obama probably has more of that kind of appeal with the ladies than any other Presidential candidate since Jack Kennedy.

And who am I to criticise my woman for having a little fun with the girls?

I don’t exactly have horse blinkers on when I go to work every night, and as much as I assure Shona that I only have eyes for her, my wife is no fool. When I tell her how myoptic I am around other women she smiles and says “You lie. Just so you get yourself straight home every night and nowheres else.”

“Obama kisses white women. What would happen to a Barbados politican who did the same thing? We dare not even put a white or an indian on the cover of the phone book.”

Back in May, 2006, Barbados Free Press commented upon the fact that both the BLP and the DLP only showed one race of citizen on their websites and in their party literature. About the BLP website we said…

“The official website of the Barbados Labour Party (BLP) – the party that has formed the Government of Barbados for 12 years as led by Prime Minister Owen Arthur – displays photos of Barbados citizens who are only of one specific race. Despite the fact that Barbados citizens hail from virtually every race and cultural heritage, only citizens of the majority race are shown on the BLP website.

We also took the BLP to task for various anti-minority racism including a government minister using the term “Caucasian” as a racist slur during a TV debate and Prime Minister Arthur calling black political opponents “indentured servants“, “negrocrats“ and “oreos“ (black on the outside, white on the inside). The BLP again showed their racist politics when they warned during the election that “whites” would vote for the DLP (horrors!) and that Thompson was “white“. 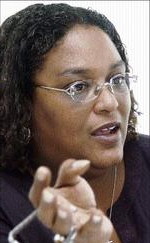 The racism continued under new BLP leader Mia Mottley at the official party blog which for seven long months linked with another blog that threatened to murder a white foreign hotel owner, Adrian Loveridge, and to rape his wife. How could a legitimate Barbados political party in the year of our Lord 2008 continue to support people who called for the murder and rape of white foreign investors and business owners who were critical of the BLP government?

What could Mia Mottley possibly have to say for herself about the continuing racism of the BLP under her leadership?

Now we see Mia Mottley saying that a “new” BLP is on the way – but this is a superficial “re-branding and re-packaging” of the same basic product with the children of the political elites taking over the role of their fathers.

“Obama and Biden are now a movement and will be the next President and Vice President. Obama will get there because of the white vote not in spite of it.”

Obama’s Support Crosses Racial Lines – Obama Unites The Races. When Will We Be That Mature On Barbados?

When our own Rihanna told the world of being “cursed out” in school because her skin was not dark enough, thousands of Bajans immediately understood what she was talking about. Race and colour are always just below the surface in Barbados. We younger people like to think that we are making progress in living together and I know that we are – but there are still too many (including many young people) who have been raised by a bitter generation that maintains self-defeating attitudes about skin colour and ethnicity.

Barbados Political Leaders Have Nothing In Common With Barack Obama

This political “leadership” has polluted our culture and much of the next generation. Racism raises its head in schools, when applying for a government job, when shopping for groceries. And especially in politics.

Racial division is encouraged by a Barbados political elite that regularly dismisses valid criticism on the basis that the opponent’s skin is not dark enough. Bajans with lighter skin colours are often given as a reason for failure – be it personal failure or failure of government projects – much like the Russian Communists would attribute production shortfalls to “wreckers”.

Oh yes, the “whites”, “indians”, “redmen” and “asians” are the cause of all trouble on this island of mongrels.

As much as our current crop of leaders support Barack Obama, they support him for the wrong reason. They don’t even understand his message.

74 responses to “Obama Kisses White Women – What Would Happen To A Barbados Politician Doing The Same?”