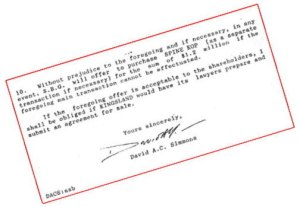 David Simmons Acted For A Corporation That Didn’t Exist!

What do you think would happen to you or to me if we signed a document in a million dollar land deal claiming to represent a company that didn’t exist?

This whole Kingsland Estates land fraud case usually just bores the heck out of me. Who can figure it out?

But then along comes another document, another piece of evidence once more showing wrong-doing or questionable activities on the part of one of the big-ups who are charged with land fraud in a Canadian court.

Today’s little document was signed on June 1, 1990 by none other than the current Chief Justice of Barbados – SIR David Simmons – who was at the time a lawyer trying desperately to get his hands on some of the prime land that is at issue in the Kingsland Estates trials.

Sir Davey boy made the offer in the name of “S.B.G. Development Corporation” a company that he said was registered under the laws of Barbados.

As usual, Keltruth Blog has the whole nasty story including copies of the Certificate of Incorporation, Simmon’s letter and some other documents that SIR David would be hard-pressed to explain away to any court except his own!