Crooked Barbados Lawyers: Only One Arrested, Many Others Allowed To Walk Free… Why? 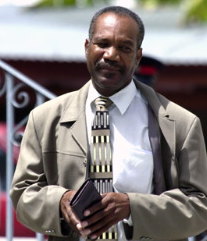 Why Was This Crooked Barbados Lawyer Charged? What Makes Ernest Jackman So Special?

Folks were recently surprised to read in the Nation News that a crooked Barbados lawyer had actually been criminally charged with stealing from clients. Usually the Barbados Bar Association does everything it can to “handle” such situations internally. By processing complaints of theft through the so-called disciplinary committee, the lawyers make sure that their own kind don’t get hurt too badly.

As with politicians, Barbados lawyers have something like a gentleman’s agreement between themselves that it is best for the profession if misdeeds are covered up. So the Barbados Bar Association talks alot about integrity and accountability – but they don’t really want to see any of their good ‘ol boys network behind bars.

Like politicians, lawyers also know that it is dangerous to put others in jail who may have as much on you and you do on them!

So we were all surprised to see Attorney-at-Law Ernest Winston Jackman charged criminally with stealing a million dollars from a couple of clients. Especially after crooked lawyers like Mortimer Clarke, Ezra Alleyne and so many others were allowed to get away with the same behaviour.

Barbados Legal Profession In Damage Control Mode – But They Just Don’t Get It!

A few days ago, Wilfred Abrahams, president of the Barbados Bar Association, was lamenting in the Nation News that there are a few “bad apples” in every profession and that the public had it all wrong in their perception of lawyers. He then went on to speak about the disbarment of Barbados attorney Mortimer Clarke who had failed to repay money that he stole from a client – saying…

The Bar Association president further stressed that Clarke was afforded every opportunity by the Court of Appeal to repay the money he had misappropriated.

“And in Mr Clarke’s particular case, the court gave him a chance. It did suspend him but it gave him a chance to pay the funds back and he didn’t. What the court is showing now, is that it is not prepared to tolerate the nonsense anymore; the court is going to hold the attorneys to a high standard and I see nothing wrong with that,” (Barbados Bar Association president Wilfred Abrahams in the Nation News link here)

High Standard? What a Lie! What a Joke!

Mr. Abrahams’ statement illustrates perfectly why citizens and foreigners alike do not trust the Barbados legal profession. Every honest lawyer in Barbados should read the entire interview and cringe at the damage that Abrahams did to the legal profession.

Wilfred Abrahams, president of the Barbados Bar Association, is so divorced from reality that he is nothing but a liability to honest Bajan lawyers.

You see, Mortimer Clarke was NOT held to a high standard. That Mr. Abrahams thinks that justice has been done is a disgrace.

Let’s review the facts of the case, shall we?

In 1999, TEN YEARS AGO, Barbados lawyer Mortimer Clarke stole $150,000 in funds from a real estate transaction where he collected the money but didn’t pass it on to his client. The client complained but the police were not called in by the Barbados Bar Association – and it took almost a decade of begging, heartache and stress by the victim to get Clarke to pay back most of the stolen money in bits here and there.

So what did the Disciplinary Committee of the Barbados Bar Association think was an appropriate penalty for Mortimer Clarke for stealing $150,000 of a client’s money?

Nope… a “reprimand” was the penalty assessed. That’s all, folks!

And Mr. Clarke could have escaped with only the reprimand except that he failed to repay $35,407.04 in interest and travel expenses incurred by the victim. A few months ago, the President of the Barbados Bar Association was placed in the outrageous position of appearing before Chief Justice David Simmons to argue that the reprimand imposed by his own Disciplinary Committee was not good enough unless Clarke paid the interest and travel expenses!

Even then, Chief Justice Simmons did not disbar Clarke – he only imposed a nine-month suspension.

Just to put this in perspective, anywhere in the civilized world a lawyer could expect a year or two in jail and permanent disbarment for similar activities. Not so in Barbados where the legal profession was apparently happy to accept Mortimer Clarke back into its welcoming arms after he had a little vacation. (”Pity you had a client complain, Morty old chap. We’ll have to make a show of it for a few months. Hope you understand.”)

Only when Mortimer Clarke didn’t come up with the money to pay the interest and expenses to the victim was the penalty raised from a nine-month suspension to disbarment.

My fellow citizens, the fact that the president of the Barbados Bar Association thinks that justice has been done in this case – after victim was subjected to ten years of torture by a crooked lawyer – is a national disgrace. More than that, it threatens our status as an offshore center for finance and corporations and it dirties the reputation of every honest Barbados lawyer.

A teacher who molests students has broken a sacred trust and for this reason is punished more severely than an ordinary person. Similarly a police officer who steals property under his care can look forward to more jail time than an ordinary thief.

There are good reasons for this standard, but in Barbados our lawyers have other standards…

In Barbados, if a lawyer gets caught stealing a client’s money, he gets to pay back the money, avoid jail and keep on practicing law!

So why was Ernest Jackman charged with theft of clients’ money while Mortimer Clarke, Ezra Alleyne and so many others were allowed to get away with the same behaviour?