At the time I am writing this, the Associated Press story Barbadians slam discovery, naming of tiny snake is less than five hours old, yet an online search shows that thousands of news outlets worldwide have published the story. The online issues of the New York Times, Newsweek, Washington Post, CNN, MSNBC and many other major news outlets around the world are featuring the story on their front pages – and all of them quote from Barbados Free Press and Margaret Knight and give the BFP blog credit for contributing to the story.

The story originated with Associated Press writer Danica Coto in Puerto Rico and is now making its way around the world with the new day – first in North America and then in Hawaii, Australia and New Zealand. News outlets in Asia are starting to pick up the story now and we presume as the day breaks in Europe and the UK that outlets there will join in.

Of course, the Olympics and the Russian invasion of Georgia are the big stories of the day – but thousands of news outlets are already following this new development in the Barbados small snake story. If the visitor numbers we are seeing continue, Barbados Free Press will receive tens of thousands of additional first-time visitors to our blog in the next week as a direct result of the AP story. There will also be a long-lasting legacy of residual visitors who will come to BFP as a result of online searches.

To Our New Visitors – Barbados Needs International Pressure To Fight Corruption In Our Government, Justice System and Police!

You arrived at Barbados Free Press as a result of your curiosity about the world’s smallest snake, but please take the time to at least read this, and maybe look around for a bit – because Barbados citizens need you to know about our battle to reclaim democracy and to eliminate endemic corruption in our government, justice system and law enforcement.

While that might not sound like the “Little Britain” Barbados you heard about, read on and you’ll see proof that the Barbados media is carefully controlled by government, and that opponents of government and the ruling elites are ruthlessly censored and harassed – even to the point of being fired or being threatened with murder, rape and arson by government power-brokers and insiders. The Rule of Law in Barbados is whatever the powerful say it is on a given day. (You don’t have to believe us about anything. Read on and you’ll see proof, photos, transcripts of recordings, court documents enough to make up your own mind.) 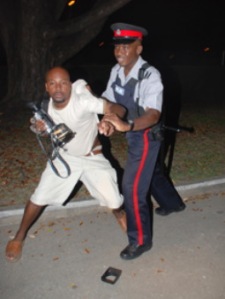 The Royal Barbados Police Force arrest and harass journalists – grabbing their cameras and erasing photos, assaulting and dragging them away for covering stories that the police don’t think the public needs to know about. The police have shot innocent unarmed citizens – even in the back of the head – and are never called to account. There are never any public inquests into deaths in police custody. Corrupt police are proven to use pre-signed blank search warrants as they act as debt collectors for powerful government officials like the Director of Public Prosecutions, Mr. Charles Leacock.

Once again, you don’t have to believe us, read the links at the end of this article and you will see photos and proof on various Barbados blogs and media outlets enough to make up your own mind.

The Chief Justice of our Barbados is “Sir” David Simmons: a career politician and former Attorney General who was appointed by his best friend, then-Prime Minister Owen Arthur, to gain political control of our courts. With the appointment of David Simmons as Chief Justice, the separation of powers between the government, the judiciary and the police effectively disappeared in Barbados.

Major police investigations, government audits, court cases and criminal charges often strangely disappear in Barbados without the news media mentioning a word. Official government documents routinely disappear in Barbados when they are evidence against a member of the ruling elite. Foreign investors or ordinary citizens who foolishly turn to the Barbados courts for justice against an elite never win. Never.

Corruption in awarding government contracts, kickbacks to officials and overpayments to favoured relatives and friends are endemic. There is no transparency, oversight or accountability of how our government spends monies it borrows or receives from international sources and agencies like the World Bank and the EU Development Fund. There is little doubt that several hundred million dollars have been corruptly siphoned off over the years.

Thank you for visiting Barbados Free Press. We love our country and we want it to be the best it can be – but we must now appeal to the International Community to put pressure on our government and business leaders to stop the wholesale corruption and human rights abuses that threaten the very soul of our nation.

Please read a few of the below links, and remember what you have read the next time that someone talks about Barbados.

Barbados Government’s Treatment of Those who Dare to Complain

The Independence Of The Chief Justice Of Barbados

Justice In Barbados – Shut Up Or Else! Court Witness Fired From University Of West Indies Professorship

Barbados Prime Minister Thompson’s Weasel Words On Integrity Legislation – No Guts. No Leadership. No Personal Transparency From Our Jet-Setter PM

How One Of The Richest Women In Barbados Was Robbed Of Everything By Scheming Lawyers, Politicians and Government Insiders