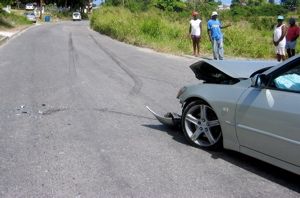 Successive Barbados Governments have failed to implement breathalizer laws that would target the growing slaughter on our roads. We lose more people to drunk driving than we do to murder, but when it came to protecting us from drunken drivers, the idiots of the Owen Arthur – Mia Mottley BLP Government never went further than talking about “maybe, if, someday”.

At least with the BLP Government, we knew that our drooling, word-slurring Prime Minister never implemented anti-drunk driving laws because he didn’t want to get nicked himself!

After almost seven months in office, the Thompson DLP Government has done nothing to address the serious problem that our country lacks enforceable, modern drunk-driving laws.

Think about that folks – in practically every civilized jurisdiction in the world when there has been an accident and the police suspect the driver might have had even one beer, the driver has to blow into a breathalizer machine to prove how much alcohol is in his or her body. We know that some people can drink lots and not “look” like they are drunk, but they shouldn’t be driving. The breathalizer provides scientific evidence so there is no doubt.

Barbados Free Press has been calling for breathaliser laws and equipment for the police for two and a half years now. In those two and a half years we have seen some horrible accidents and even mass accidents – but our law enforcement officers have no way of testing to see how much those drivers had been drinking.

Prime Minister Thompson… time to act, Sir. If your government can’t implement breathalizer laws during the first year of your term, that will pretty well say everything about your priorities and leadership.

October 30, 2007 – More Road Deaths Than Murders: Yet Barbados Still Does Not Have Breathalyzer Laws Or Technology

August 15, 2007 – Minister of Transport Gline Clarke Finally “Talking” About Driver Breathaliser Tests – As First Suggested By By Barbados Free Press Over A Year Ago