Let’s Discuss This Again: Nation News Finally Discovers That Barbados Police Don’t Give A Damn About Rule Of Law

“For as in absolute governments the king is law, so in free countries the law ought to be king; and there ought to be no other.” Thomas Payne, 1776

The Rule of Law, in its most basic form, is the principle that no one is above the law.

Two Nation News articles appearing online today might mean that the lapdog editors at that rag are finally waking up to the truth about how the Royal Barbados Police Force operates without accountability, effective civilian oversight or the least concern about the foundation of our society that is called Rule Of Law. (Rule of Law definition here) 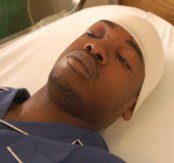 We Don’t Do Inquests Into Police Shootings In Barbados

In Barbados, police officers can shoot an unarmed man in the back of the head because he wouldn’t stop for police while on his bicycle at night – and there will be no inquest or civilian oversight of any police investigation. (BFP story link here)

The island news media will never mention the occurrence again. It is like it never even happened.

The innocent young man who now lives with bullet fragments in his brain will not complain about the police either.

The thugs from the Royal Barbados Police Force put a bullet into Stefan Griffith’s skull for nothing… what do you think will happen if he complains now?

That is not exactly the picture of Barbados justice that we love to portray abroad. When it suits us, we prefer the fairytale that this is “Little Britain” where democracy, individuals’ rights and rule of law are not merely showpiece window dressing, but the very foundation of society.

In truth, Barbados is more like a country where the people have yet to hear about the Magna Carta.

You should make it a point to remember Glenroy Brathwaite. (Also spelled Brathwhaite in some stories.) At best he died because of the criminal neglect of Barbados police officers.

At worst, he was murdered – beaten to death by officers of the Royal Barbados Police Force.

Back in December of 2006, Glenroy Brathwaite was arrested by Barbados Police for… what? The public was never really told although if you read between the lines of a newspaper article he may have been drunk in public.

Glenroy’s sister saw him and says he had been roughed up by the police and left lying on the floor in his own blood, urine and faeces. No charges were laid against Glenroy, and less than 24 hours after being released from police custody, his cold and bruised body was lying in the hospital morgue.

It looks like Glenroy Brathwaite was beaten while in the custody of police – and beaten so badly that he died later in the day.

That could be murder – but there will be no inquest. (BFP story link here.)

Typical Barbados Inquest Into A Death In Police Custody

When asked about Glenroy Brathwaite’s death, Commissioner of Police Dottin told reporters he would (yawn) “look into it”. The last Nation News article before the story was made to disappear was titled “No Marks of Violence” on Dead Man… and then the story explained that Brathwaite had a fractured skull!

So the inquest that we had was one police officer saying he would “look into it” and another man – a pathologist – saying that Glenroy’s skull was fractured… but there were no marks of violence. Typical Barbados inquest.

Back in April of 2008, Barbados Free Press called the Police Complaints Authority a fraud. In an article (link here) we said…

Did you know that the Barbados Police Complaints Authority was (sort of) established in 2004, but that it never met once from April 2005 to mid 2007?

That same article by BFP details how a judge took the Barbados police to task for failure to perform internal investigations and how the police delayed and manipulated for four years until assault charges against police officers faded off into nothing as per usual. (How do court cases regularly disappear in Barbados? See The Strange Disappearing Court Cases Of Barbados – And How The News Media Keeps Silent)

And then there is the story of British foreign investor Adrian Loveridge, who came to Barbados so many years ago and fell in love with the land and the people.

The BLP Government was happy with him when he purchased a hotel, invested money, provided jobs and became a huge vocal supporter of our tourism industry.

But when Adrian dared to publish a few letters criticizing government wastage – however gently – he was fired from his newspaper column, banned by the Tourism Minister from taking part in the public discussions about the industry that he knows so well.

Then as the elections drew near, there were online threats of murder and arson. Adrian’s hotel was arsoned TWICE after the arson threats were delivered. In our story COVER-UP: Royal Barbados Police Force Ignores Violent Threats To Businessman, you can read about the entire disgusting case.

Many of the threats came from a computer at the Barbados Parliament that is used by MP William Duguid. This was confirmed by none other than the Secretary General of the Barbados Labour Party, Doctor William Duguid, himself. (Dr. Duguid’s comments are here)

Did The Police Push I’Akobi Tacuma Maloney To His Death?

My friends, we could go on and on about police wrong-doing in Barbados. If you insert the word “police” into the search box near the top of Barbados Free Press, you can read for hours.

There will be no public inquest into his death. There will be no public process to examine the circumstances of how he died while “in the company of” Barbados police. Eventually, the local news media will quietly let the story fade into the past, and people will say “Well, there was some sort of inquiry and it showed…” BUT THAT WILL BE A LIE.

No, Barbados is not yet Zimbabwe, but in many things – especially the absence of the Rule of Law and zero accountabilty of out-of-control police force thugs – Barbados is a hell of a lot closer to Zimbabwe than to Britain or the United States.

Caricom, Crime and Rule Of Law

53 responses to “Let’s Discuss This Again: Nation News Finally Discovers That Barbados Police Don’t Give A Damn About Rule Of Law”