The Cheques That SSA’s Stanton Alleyne Refuses To Explain

UPDATED: September 15, 2011 (Pinned at top. Scroll down for newer content)

Stanton Alleyne given raw deal… or lucky he wasn’t charged for taking a kickback?

“If an individual is not worthy of his hire, why string him along? There are no adverse reports being held against Mr Alleyne.

“His performance over the past seven years cannot be in doubt, given the fact that he has not been reverted to his substantive post and no charge has been laid against his performance.”

Why Did Stanton Alleyne Take Money From A Government Contractor?

Back on March 12, 1999, Stanton Alleyne as the acting manager of the Barbados Sanitation Service Authority wrote an official SSA letter to the Manager of the Caribbean Commercial Bank informing the bank that “Andrew’s Builders” had been contracted to refurbish the SSA’s recreational facilities for the sum of $130,000.

That letter appears below.

Then one week later on March 19, 1999, Stanton Alleyne cashed a $500 cheque made out to him by Andrew Builders and signed by none other than Andrew Thomas – the same government contractor hired for the $130,000 renovation at the SSA.

Once more on April 8, 1999, Stanton Alleyne cashed another $500 cheque again made out to him personally by Andrew Builders/Andrew Thomas.

There was a reason for the cheques. When the SSA Board recently became aware of the cheques, they asked Mr. Stanton Alleyne about that reason, and he refused to explain why a government contractor gave him the thousand dollars.

Mr. Thomas says that the reason he gave the money to Alleyne was clear. It was as a corrupt “compensation” for his being awarded the government contract at the Barbados SSA. Mr. Thomas even swore to that in writing in front of a Justice of the Peace.

The cheques are at the top of this article. Both letters appear below.

In true Barbados fashion, Stanton Alleyne still works at the SSA – and he still refuses to provide any explanation for the cheques.

But what do we expect? This is Barbados where the former Prime Minister, Owen Arthur, took a $75,000 cheque and corruptly deposited the same into his personal bank account. Owen Arthur faced no consequences for his action, and neither will Mr. Alleyne.

Our whole society is corrupt from the top on down. Even the Chief Justice is a political hack appointed to stack the courts. He had never been a judge before, but that didn’t stand in his way because he was appointed for a reason.

There are reasons for everything, folks…. but the corrupt elites never provide any reasons to the public. Why should they? Like Owen Arthur and Stanton Alleyne, they know that even if they get caught taking a cheque… nothing will happen.

Welcome to Barbados… Not the most corrupt nation on earth, but some are trying to make it so!

Barbados Underground: Documents At The Centre Of The Recent Sanitation Service Authority And National Union Of Public Workers Dispute, Exposed 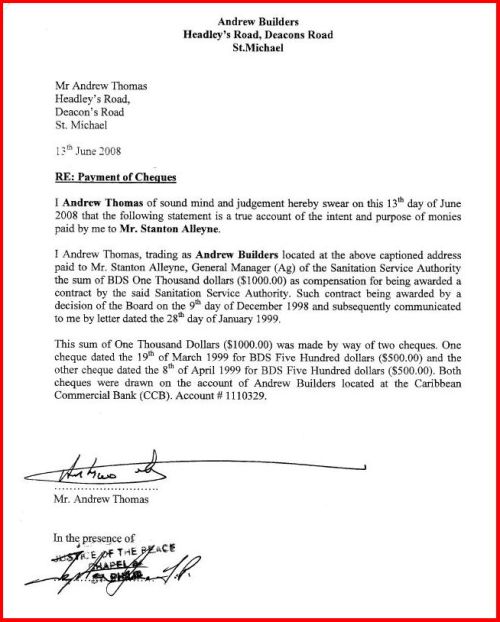