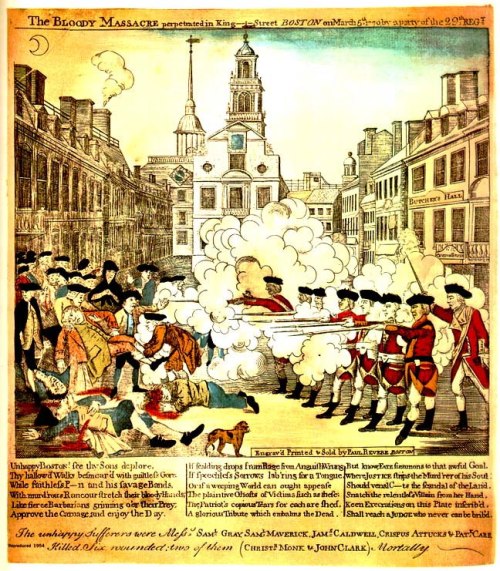 The Invisible Blacks Of The American Revolution

Happy July 4th Independence Day to our American friends. Like many Caribbean families, we have relatives in the USA and other countries – even in the country of Brooklyn. 😉

The world is a smaller place now.

This Independence Day we’d like to remember Crispus Attucks, a man who was killed in the infamous Boston Massacre of 1770 – an event that became a catalyst for a growing revolution. The poster above was created by revolutionary Paul Revere to get word out about the murder of Boston civilians by British troops.

I guess these days they would call Mr. Revere an “insurgent”. The Brits probably called him something else.

Bye the way… did you know that many of the “British” troops that battled Revere and his comrades during the American Revolution were German? You didn’t know that? I am still amazed at the number of Americans who don’t know that.

But I am more amazed at the number of Americans who don’t know that blacks fought on both sides of the American Revolution, but perhaps I shouldn’t be surprised that these soldiers have been so invisible through the centuries. 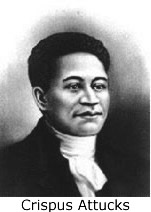 See that poster of the Boston Massacre? Do you see any black Americans falling to the British shots? Former slave and then free man Crispus Attucks was one of the dead on that March day so long ago – but he is not depicted in that poster by Revere. That is not to say that Paul Revere was a racist – maybe he was or wasn’t, I don’t know.

But the intent of the poster was to inspire Americans to outrage at the murders of Boston civilians – and in 1770 the death of a former slave wasn’t exactly a tragedy to inspire rebellion.

So as we wish our American friends well on this day, we want them to remember that the history of the American Revolution isn’t as white as the school textbooks have proclaimed for the past two hundred years.

Black Sailors and Soldiers During the American Revolution – Crispus Attucks

African Americans In The Revolutionary Period