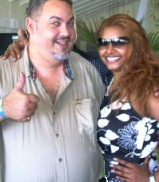 You Can’t Always Believe Everything You Read Or See Folks!

It looks like our old friend Ian Bourne of Bajan Reporter Blog is getting along just smashingly with (as Ian refers to her) “the curvaceous Rhona Fox“.

Hmmmmm. No argument from me, Ian!

Of course, it might be that Shona is having a little fun with PhotoShop this morning too! Thats why she left the little bad area by Ian’s face so he could deny everything when his womany hits the roof. 😉

So some things aren’t always what they seem.

Like last year when Barbados Free Press lamented the fact that the Barbados news media ignored the visit of the Royal Navy warship HMS Southhampton. Ian went on a bit of a rant about BIM not being under Britain’s thumb anymore saying…

“I knew about the warship, I couldn’t make it – so it was like “big frigging deal”…. BTW: we should be a republic, no flippin monarchy, just leave Nelson alone as I do not want MY tax-paying bucks to move the old geezer”

If a UK group want to drop off their pounds while here and so forth, I would not refuse it…

But does this mean I have to genuflect and scrape as a warship tips ashore or when the grandson of a hereditary leader whose type of rule no longer applies to Britain and its FORMER colonies decides to snog/shag at a West Coast hotel? Bloody hell, NO! As a calypso from Tony “Commander” Grazette says – “Tell dem, slavery done”

Visit all you like & remember your days of glory, but if you expect a spit-shine like the old days? Tek a long walk off a short pier, dearie – Doan let um hit ya where da Good Lord split ya! Peace 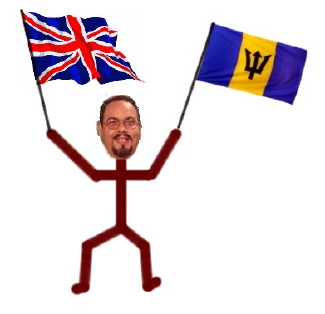 That Was Then – This Is Now

Good old Ian is at heart an honest man, so today he had to admit that last year’s rant was a bit of “sour grapes” for him. It appears that Ian is as fascinated with the warships of the Royal Navy as we are. 🙂

And like most of us, Ian is probably still conflicted about history, the Monarchy and our current relationship with “them-they” over the pond.

Then again… we haven’t seen too many folks ’bout hey turn down the title of “Sir” when offered – no matter what they bravely say about Bajan independence with a rum in one hand on a Wednesday night!

Anyway, Ian has written a good piece about the visit of the Royal Navy warship HMS Iron Duke. You can check it out at Bajan Reporter Blog… 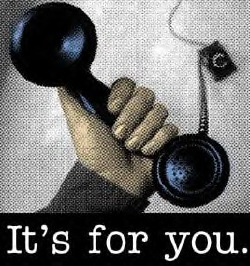 That Was One Expensive Phone Call…

I can’t figure it out – maybe you can.

Peter Simmons, the brother of the Chief Justice of Barbados Sir David Simmons, made one little phone call and ran into a wee bit of legal trouble because he threatened a lawyer on the other side of a legal case he is embroiled in.

So who pays for his lawyer and the fancy “psycholinguistics” expert to say that dear old Peter didn’t really mean to threaten anyone when he made the threatening phone call?

What the devil is going on here? Why would PWC pay the legal bills for someone who supposedly has nothing to do with their firm?

I can’t figure it out. Maybe you can…