This article was first published on June 20, 2008. Since then, the following people have been charged with fraud…

(Are you kidding? Thompson and the DLP will never charge anyone with any corruption offense. The DLP don’t want to start that kind of war with the BLP because they are so busy feeding at the public trough themselves. Same old, same old ’bout hey!)

Has Mr. Barrow, the victim, had his house repaired in the seven months since this article was written?

“If Thompson and the DLP can’t put anyone in jail with the circumstances surrounding this case, they had better stop pretending that they intend to do a damn thing about corruption on this island.” … BFP’s George on a rant

It seems that when Hurricane Ivan went by here in 2004 the home of Theophilus Barrow was destroyed. Our illustrious government soon created a $4 million dollar emergency fund and money was paid out so that Mr. Barrow’s home would soon be rebuilt. Self-congratulations were spread all around with politicians bragging, civil servants strutting and “aren’t we all wonderful taking care of those who have trouble taking care of themselves” was the prevailing word.

FOUR YEARS LATER it finally comes out. The money that was paid out for Mr. Barrow’s new home is missing. He never got it, Ministry of Home Affairs have no clue, and Judy Thomas of the Central Emergency Relief Organisation doesn’t want to talk about it even now, four years later. Hmmmm…. I wonder why? 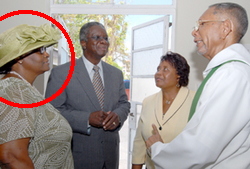 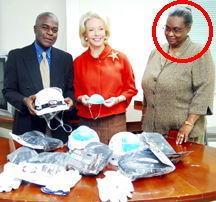 Thomas said: “I don’t think I need to shed any light in the media on that matter.”

No surprise here. What did we expect with a government regime that was corrupt from the top down? Public money, emergency money for a poor defenseless man, stolen in broad daylight and him left homeless.

Does the Government of Barbados pay for an entire house and never look at the finished product before handing out money? Who signed the inspection off? Who signed the cheque? Who was in charge? Was Director of Emergency Management Judy Thomas (red circles above) in charge? Who knew and kept quiet? Put them all in jail.

Five or six people and a few big-ups in jail for corruption would fundamentally change our society. People would actually start to believe that there was RULE OF LAW for all.

Somebody Stole That Money

That is fraud Mr. Thompson, pure and simple. It is disgusting. It is happening on your watch. Sure, we know that you can blame it all on the last bunch, the Barbados Larceny Party, but now YOU are in charge. YOU promised transparency, YOU promised a new regime of honesty and integrity. And here is your chance to show us that you mean it.

How about you cancel one of your jet set appointments in Toronto, New York, Miami and go and visit Mr. Barrow and get the construction started? While you are at it tell us who got the money and have everyone involved either charged or fired – preferably both. There are no innocent persons here. Those that handed out the money and did not follow up and institute checks and balances then they are complicit.

And then Mr. Thompson, when you are visiting Mr. Barrow – apologize to him. Then apologize to all other Bajans who are not able to help themselves and have continually been the victims of the scams, the larceny, the fraud and thefts perpetrated or allowed by the very people who are elected to lead and protect them.

Mr. Thompson it is time for you to pay attention to this problem of corruption that has infected our government and civil service, and the policing, legal and business communities. You promised to introduce integrity, transparency and accountability laws and standards within 100 days. Do it now and begin the process of ending the disgraceful abuses that hurt people like Mr. Barrow.

The Nation Newspaper is to be lauded for finally doing some investigative journalism. Given the shocking nature of the story Maria Bradshaw’s reporting was somewhat lightweight and about three years overdue – but, hey, it is a step in the right direction.