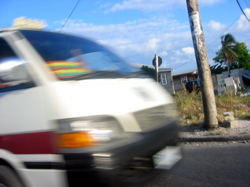 The new Government of Barbados came into office to find the treasury raped bare by 15 years of borrow and spend to fund a host of costly and incomplete “super projects” that did little for the ordinary citizen or the country. These ill-considered mega-projects range from the Cricket World Cup white elephant stadium to the new flyovers being built by a company with a senior executive that admits to corruptly giving bribes on other bridge projects in the Caribbean.

The previous government seemed incapable of completing anything correctly except media releases. Remember breathaliser legislation? We have a serious problem on this island with collisions caused by drinking and driving, so once a year the Attorney General or Transport Minister would announce that the government was “considering” or “moving towards” implementing laws to stop the carnage on our roads.

But that’s all we got… an annual press conference.

Hopefully the new Thompson government will be able to translate good ideas into action, and action into successful implementation.

But the first step in the process is good ideas – and we believe that Thompson and his Transport Minister have come up with a good idea in shaking up public transit and also their proposal to provide free travel for school children and low-income workers.

In fact, we think that the government should go further and make all public transportation absolutely free to all – citizens and tourists alike.

Friends, wipe the froth from your mouths and hear us out before you start pounding your keyboards…

The BLP’s solution to transportation on Barbados has always been more vehicles on more roads. That was always a flawed philosophy, and especially so in the last few years as oil and construction costs skyrocketed. Not to mention that the more successful that the BLP was in providing new and improved roads, the worse things became as the number of vehicles increased.

This BLP philosophy of more roads and more vehicles is madness – but thank heavens, it looks like the Thompson administration is focusing upon improved and expanded public transit rather than the idea of three cars to every home.

Public transit can never totally replace the personal vehicle, but we can remove thousands of vehicles from our roads every day by providing reliable, safe, cheap and convenient public transit.

Many folks don’t like the ZRs. Aside from the “ZR Culture” that repels rather than attracts customers, there are safety concerns caused by far too many drivers racing to pick up more passengers. But what do we expect when the system is set up in such a way that the faster and more reckless the driver, the more money they make?

The government intends to bring the ZRs into a more controlled and better administered public transportation system. Kill the music, kill the speeding and overcrowding. That will be a good start in encouraging Bajans to park their private vehicles and take public transit most of the time.

By providing free bus transportation to school children and low-income workers, the government accomplishes a few goals. Firstly it provides a small but needed financial break to families and those on the low end of the income scale. Secondly, it will increase the utilisation of public transit and thereby relieve some pressure on the road system.

There is much more that needs to be done to grow the public transit system – perhaps even a light rail train around the circumference of the island.

Picture a Barbados where citizens and visitors can make 75% of their trips via free, safe, convenient and reliable public transportation.

Think about how the world would perceive such a transportation system. We could probably fund much of the cost simply through the savings of not having to continually build new infrastructure to support thousands and thousands of additional cars coming onto the roads every year.

We must make some big changes if we are to survive. Incremental changes will not work.

If Thompson and his government can stay focused on improving public transit and discouraging additional vehicles on our roads, it will benefit everyone far more than the old system of never-ending expansion that is designed to support an obsolete religion that worships the personal auto.

From the Nation News…

IF A PROPOSAL now being studied by the David Thompson administration is approved, thousands of schoolchildren and low-income workers will be able to travel free on the buses.

That would happen, said a highly placed confidential source close to the new Government, if the administration went ahead with a proposal to overhaul the bus transportation system from top to bottom and provide what would virtually be a travel subsidy to some sections of the public, at a time of high oil prices.

At the same time, the privately-owned mini-buses and ZR vans, the source said, would be “fully integrated” into the bus system in a way that would allow their owners to improve service, extend their route structures and make a profit at the same time.