Shoe Incident Is “Tip Of The Iceberg”

We have heard rumblings that the new DLP Government under David Thompson is uncovering unbelievable incidents of corruption by the past BLP Government. Like everyone on this island, we’ve been hearing and seeing the evidence of BLP corruption ourselves for about a decade, so these revelations are hardly surprising.

What will be surprising is if the DLP Government actually follows up with charges and recovery of our stolen funds from BLP members’ offshore bank accounts.

BFP reader “Wishing In Vain” is a DLP Government insider who has proven his credentials many times on this blog by delivering insider information.

The reality of the situation is that even on the 31 st of March 2008 the NATION NEWSPAPER has not yet woken up to the fact that there was and election held on the 15 th of January 2008 and the ruling party of the day were evicted from power and control of this great island we call home.

Since the election the paper has shown a clear bias towards positive coverage for the blp, not sure how they manage to spin it that way as they are totally out of sync with the citizens who charged the blp with arrogance and corruption and gross misconduct in office, but their effort to make the blp look good is ongoing, what a job they have on their hands made even harder with the reports being filed on things such as HARDWOOD HOUSING, Urban Development, National Sports Council, explain how Booza King could charge the organisation he is part of and involved in $48,000 for catering for less that 120 persons at an event held by the N S C or where did the container of donated shoes from the gov’t of China to the people Barbados get sold by these same bastards, this is only the tip of the iceberg these are some among others.

Please provide the details about the shoes, WIV. Names, dates, where etc.

Stay tuned to this station, trust me as real as it comes.
The reality of the extent of the reach of this corruption is unreal.

We know how bad it was, WIV.

What we don’t know is whether people will go to jail for it or not. We don’t know if the Government will launch wide-ranging international lawsuits in attempts to recover the offshore funds… or if it will hesitate because that knife cuts both ways.

We are also extremely disappointed with the lack of transparency and accountability shown by the PM over the bizjet issue, and his broken promise to immediately adopt the Ministerial Code as he said he would.

You can read the entire exchange here.

“Now that the next election is approaching in 2012/2013, some folks from the BLP have asked us to remove or modify our past stories of the threats.

To that request, BFP replies: NOT A CHANCE!”

For seven long months in 2007/2008 the official WordPress blog of the Barbados Labour Party linked to the BFPE blog (Barbados Free Press Exposed) that published threats against many people, including threats to murder Adrian Loveridge, to burn down his business, and to rape his wife. At the time in 2007/2008 the Barbados Labour Party was asked to remove the links from their blog to BFPE but did not do so for seven months until BFP and Keltruth blog focused on the story and wouldn’t let go.

The Barbados Labour Party blog was started by Dr. William Duguid, who was an MP and high party official but we don’t know who was in charge of the official BLP blog at the time that the editor decided to link to the threats at BFPE. It is a fact though that the Barbados Labour Party knew of the threats to murder Adrian Loveridge and was content that their official BLP blog should publicize and link to the blog where the threats were posted. The Royal Barbados Police Force shamefully refused to investigate the threats, and especially after information surfaced linking some of the threats to a computer in the Member’s Lounge of the Barbados Parliament!

Now that the next election is approaching in 2012/2013, some folks from the BLP have asked us to remove or modify our past stories of the threats.

To that request, BFP replies: NOT A CHANCE!

As a reminder of what happened, read the following story originally published by BFP on March 31, 2008…

Who says that blogs don’t have the power to force change in Barbados?

Just a few hours ago the Barbados Labour Party – BLP – came one step closer to ending a shameful incident in the history of the party and Bajan politics.

The official BLP Blog has just now stopped promoting and linking to a website that published threats to murder political opponent and hotel owner Adrian Loveridge and his wife.

It took seven long months for the Barbados Labour Party to decide to disassociate itself from people who call for the murder and rape of BLP political opponents!

The offending website is the Barbados Free Press EXPOSED (BFPE) blog that has been active since August of 2007. The operator(s) of BFPE threatened to murder Adrian Loveridge and his wife on several occasions by posting articles and comments on BFPE and by posting comments on other Barbados blogs. They also posted comments threatening to rape Mrs. Loveridge and to burn down the family hotel. END_OF_DOCUMENT_TOKEN_TO_BE_REPLACED 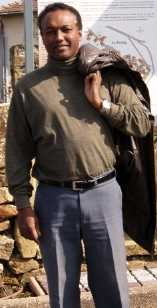 Had he taken advantage of this opportunity, Mr. Leacock would have heard retired banker Basil Graham saying “The responsibility of the collector is to motivate the debtor to pay . . . You have to let them understand that you are not adversaries and your intentions should not be to fight, bully, nor to antagonise,”

Our Director of Public Prosecutions had a little problem with collecting some back rent from one of his tenants two Christmases ago, so he had a corrupt police officer named Paul Vaughan drag his female tenant from her screaming child in the middle of the night.

Sergeant Vaughan took the tenant Ronja Juman to the police station where she was strip-searched – presumably looking for back rent. After having a female police officer look in Ms. Juman’s vagina, Sergeant Vaughan told her she had better pay her debt to the Director of Public Prosecutions or she would be charged. She was then released without charges because, after all, the intent in dragging her from her home in the middle of the night and humiliating her with a vaginal search was not to lay charges, but to get her to pay up.

Juman had given some jewellery to the Director of Public Prosecutions earlier on, but you know how it is with extortionists… once you start to pay you have to keep on paying.

When Juman couldn’t come up with more money, the Director of Public Prosecutions had her charged with a criminal offense over the back rent! What happened to those charges is anybody’s guess because the Barbados news media is too frightened to cover the story.

So we say that it is a shame that Director of Public Prosecutions Charles Leacock didn’t attend the Effective Debt Collection seminar – but it is understandable. Thugs generally don’t take seminars about customer relations.

When you are one of the most powerful men on the island and you can have your corrupt police friends descend upon your debtors in the middle of the night – who needs seminars?