Canada Announces Open Skies With Barbados – But What Does It Really Mean?

As they say… “hot off the wire services”, the following came in about 60 seconds ago. I don’t have enough knowledge to know what it means but I’m sure some of our readers will be able to decipher the hype from the reality.

Read about it now on Barbados Free Press… or maybe tomorrow or the next day on the CBC or Nation News. Hey… did the Barbados Government announce this yet? Hmmmm… nothing on the Government Information Services website yet.

I love it when a little nothing blog like ours scoops the regular media. 🙂

Here are some excerpts of the Canadian Government press release. You can read the full release here.

OTTAWA, March 4 /CNW Telbec/ – The governments of Canada and Barbados have negotiated an Open Skies-type air transport agreement to increase trade and tourism between the two countries. The agreement was announced today by the Honourable Lawrence Cannon, Minister of Transport, (snip) and the Honourable David Emerson, Minister of International Trade, (snip)

“This is Canada’s first Open Skies-type agreement in the Caribbean region
and signals another step forward in providing greater flexibility for air
services for passengers, businesses, air carriers and airports,” said Minister
Cannon. “I am pleased with the outcome of these negotiations, marking another bilateral air services agreement achieved under Canada’s Blue Sky policy.”

“Canada greatly values its close, long-standing relationship with
Barbados,” said Minister Emerson. “Canada is celebrating the 100th anniversary of the Canadian Trade Commissioner Service’s presence in Barbados this year. The new agreement will provide a stronger basis for competitive air services. We anticipate this will generate even more growth in trade, tourism and investment.”

The new agreement also provides all-cargo air carriers with greater
options to facilitate and expedite the flow of cargo between both countries,
and third countries, including those of the Caricom region. (snip)

This new agreement builds on Prime Minister Stephen Harper’s visit to the
Caribbean region in July 2007, when he outlined Canada’s re-engagement in the Americas as a critical, long-term international priority for the government.

In 2007, trade between Canada and Caricom members, including Barbados,
was $2.2 billion, a 20-per-cent increase from 2006. Canadian merchandise
exports to Caricom totalled $725 million and merchandise imports from Caricom totalled $1.47 billion. In 2006, 25,600 Canadians travelled to Barbados. The Caricom region received more than 251,100 Canadian tourists in 2006.

The new provisions are applied immediately. Once ratified, the new
agreement will replace the 1985 agreement currently in force.

Barbados Minister of Health and Social Security Dr David Estwick announced yesterday that Greenland dump will not be used as a sanitary landfill because of the risk that garbage posed to aquifers in the area. (See Nation News article Dump Halt)

Wise decisions become relatively easy when our government ministers are intelligent and honest. It certainly beats stupid and corrupt anytime.

The previous BLP government wasted almost 60 million dollars or more trying to make the site work in the face of 150 years of overwhelming evidence that the soil at Greenland is unstable, prone to landslip and that it would be an ecological disaster to continue.

Both outside and Bajan experts warned of massive damage to coastal areas and beaches if the project continued and no engineer could be found who would sign off on the design of the leachate holding tanks because they were sure to crack on the unstable soil. Yet, the BLP government continued to spend tens of millions more dollars having their construction friends move sand and rocks from one area to another for no purpose other than profit. 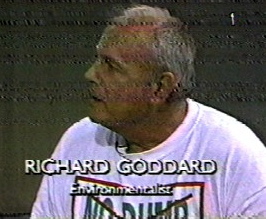 Richard Goddard Carried The Flag For Us All

For almost two decades Richard Goddard sounded the clarion about Greenland dump. He organised, wrote letters, sought out experts, took photographs, lobbied the government and the media and researched the long history of landslips and disasters in the area surrounding the Greenland. When the Barbados news media would not print the truth, he printed flyers and sent emails in a person-to-person campaign to educate and warn his fellow citizens.

When the Barbados Labour Party persisted with the folly, he took the government to court. And when the courts did the government’s bidding and many others gave up, Richard Goddard continued the battle.

This is not to take away anything from the many others who fought the war of ideas and truth about Greenland dump, but it was Richard Goddard who was the public face of that war, and as such he was ruthlessly attacked by the government of the day.

Goddard was vilified by many BLP Government Ministers. His crops were burned several times to the point where he no longer planted because he knew his fields would again be fired. His business was audited in a manner that left no doubt that the BLP government was sending him a message. On national television, BLP Cabinet Minister Liz Thompson dismissed Goddard as being “Caucasian” in a racist attack that had nothing to do with the issue of the Greenland dump. (BFP article & video here)

And still he persisted in his campaign to stop a national disaster in the making.

The Work Must Continue

At this moment it appears that Richard Goddard and his fellow citizens have won a great and just victory for all of Barbados. And, judging by the new Health Minister’s comments about the need to stop the dumping of cooking oils and other liquid waste at Lonesome Hill and to start treating garbage as a resource, the message of environmental responsibility has been heard loud and clear by the new government.

We must remain vigilant and active to ensure that the new government does not falter on the path, and there is still concern about what will happen to Greenland and other irreplaceable natural areas on Barbados…

… but for a few days we can take the time to say prayers of thanks, to celebrate this victory – and also to say a sincere thank you to the man who stayed the course.

Every person on this small island owes Richard Goddard a great debt.

To list all the Greenland Dump articles at Barbados Free Press, type “Greenland” into the search box in the upper right.