Freedom Of Expression, Corn Rows, Race and Culture In Barbados

“Would the deputy principal of the Samuel Jackman Prescott Polytechnic (S.J.P.P) like these students to cover their beautiful black hair under an Elvis Presley style wig or would a Donald Trump style wig be more acceptable to him?”

A Guest Column by a BFP Reader…

Over the past few weeks our nation has been grappling with two issues both of which have the potential to – if allowed – inflict irreparable damage on the very progress that we have pursued and attained as a society thus far. I refer to the industrial relations dispute and the controversy which has been generated in the wake of young senator Griffith entering into what one commentator euphemistically referred to as “the august chamber” with his hair in corn row followed by the barring of students from one of the islands educational institutions because of their chosen hair styles. For the purpose of this article I shall examine the hair issue and the far reaching and dangerous ramifications it holds for us black Barbadians as a people.

Today we live in the information technology age or what some might refer to as one global village. By this token what ever becomes a national issue in Barbados is scrutinized, examined and critiqued far beyond these hills and valleys we call our very own. As a result I found myself standing on the thirty third floor of an investment bank on wall street discussing with fellow workmates how someone in such a critical role as an educator could have such a backwards mentality vis a vis the issue of hair styles, in the worlds number one developing nation no less.

My Chief Financial Officer who is an African American and has worn locks her entire adult life was gracious enough to share her personal experience in relation to this type of issue with us. She was recruited to work for the firm straight out of college back in the mid seventies when locks was still a taboo and among other things discriminated against in American society. At the interview which she attended wearing her locks it was understood she would be hired for her brilliant academic performance and the perceived positive contribution she would make to the firm going forward. Her hair style was never an issue.

Upon arriving for work the first morning she was stopped as she got off the elevator and told that her locks were an inappropriate hair style. She looked around her and came to the realization that every one around her either had straight long blonde hair, auburn hair or brunette hair. Upon realizing this she told the then boss to allow her a few minutes while she went about correcting this problem of inappropriateness. With that she proceeded back down and out of the building to Canal Street where she purchased the straightest long blonde wig she could find.

Upon returning as she stepped off the elevator she rolled her locks up and covered them with the blonde wig and proceeded to her desk. Apparently the problem of inappropriateness was solved because she was no longer told that her hair style was inappropriate but those around her did show a measure of discomfort. As she got onto the elevator in the evenings she would take the wig off and let her locks flow and become herself again.

Herein lies’ the first question. Would the deputy principal of the Samuel Jackman Prescott Polytechnic (S.J.P.P) like these students to cover their beautiful black hair under an Elvis Presley style wig or would a Donald Trump style wig be more acceptable to him? Would he then consider their hair style to be appropriate?

I categorically declare it is absolutely unacceptable to dictate to a person any kind of conditions for their own hair, as long as said hair does not present any kind of a problem or threat to the general public. To single out a specific hair style and deny a person an education on the basis of that hair style is a blatant act of discrimination. Are we going to trivialize persons’ education and futures to a hair style? Education is supposed to open our minds up but this is a direct attempt to close the minds of these students down and force them to conform. Are we building a society based on conformity and conform to what? What message is the deputy principal sending when he says’ to these students their must cut their hair low? Does the students’ expression of their natural self become so offensive to him that he tells them to show as little of their natural self as possible?

Today it is the hair style: will it be the colour or tone of a persons’ skin tomorrow?

END_OF_DOCUMENT_TOKEN_TO_BE_REPLACED 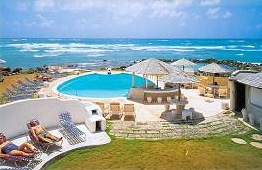 “If tourism is doing so well, why are we losing so many of our hotels, so many jobs in tourism?”

A strong and vocal critic of the previous BLP Government’s tourism policies has been appointed as a board member of the Barbados Tourism Authority.

Adrian Loveridge is the co-owner of the award-winning small hotel “Peach and Quiet“ at Inch Marlow on the south coast. His “2 star” hotel thrives in an area where many other small hotels have failed – and has won many awards including Fodors First Choice and “Best Bargain Caribbean” by TripAdvisor.Com. (That’s Peach & Quiet Hotel in the photo.)

Mr. Loveridge was so feared as a critic by the previous Barbados Government that the BLP Tourism Minister Noel Lynch had him fired from his part-time job at the Barbados Advocate newspaper. (The cowardly editor and publisher said “YES MASSA” when the Tourism Minister gave a choice of firing Loveridge or being cut off from government advertising revenues. Story here)

The same BLP Tourism Minister also arranged to have Adrian Loveridge excluded from a radio talk show panel where he was appearing. (That didn’t work out so well as public pressure forced the Starcom Radio Network to reverse that decision. During the show, Minister Lynch famously stormed out of the studio when the host asked him how he became a millionaire on a government salary. Listen to that exchange here)

We found out about Loveridge’s appointment when we read the Nation News article Taylor Taking Over At BTA and saw the list of new board members.

Didn’t the editor/publisher at The Nation News feel just a tiny bit embarrassed and ashamed to print the name “Adrian Loveridge” after all these years of censorship? Or perhaps the editor/publisher doesn’t really care because she knows her paper is a journalistic prostitute at best anyway?

Adrian Loveridge Can’t Be Bought, Bribed Or Forced To Bend To Government Policy

What can you do with a person who has proven himself to be both a big picture thinker about our tourism industry and incredibly successful at running his own business in the industry?

That’s easy if you are a government that is trying to make some positive changes and bring the best talent it can find to the BTA table: you hire Adrian Loveridge.

And have no doubt: the government knows that they are hiring a man who has already being banned in the news media, threatened with death, fired from employment, had his business broken into and arsoned and still would not be silenced.

In short – the DLP Government knows that Adrian Loveridge will give them and the public the unvarnished truth along with the best effort he can make.

And if anyone has any doubts about Adrian Loveridge holding back the truth about anything just because of a government appointment, they should read his latest comments about how the useless so-called detectives at the Royal Barbados Police Force have done nothing about the death threats against Adrian and his wife. (Adrian’s comments can be found here.)

We at BFP and our readers have some questions and suggestions for Adrian but we’ll leave those for another day.

Our best wishes and thanks also goes out to the other members of the Barbados Tourism Authority board. Here is the complete list…

Denis Roach, Roseanne Myers, Adrian Loveridge, Dr Jeannine Comma, Eric Mapp, Shelly Williams, Michael Yearwood, Sunil Chatrani, Alvin Jemmott, Dean Jean-Marie, Steve Alleyne, Bernard Weatherhead; and a representative of the Barbados Association of Retailers, Vendors and Entrepreneurs, the Barbados Workers’ Union; president of the BHTA or his nominee; and the permanent secretary in the Ministry of Tourism or his nominee.

It is truly interesting how the Barbados news media never said the words “Safari” and “robbery” in the same sentence until the police arrested a suspect.

Remember folks… crimes don’t occur on Barbados unless a suspect is in custody! 😉

Police have made a breakthrough in their investigations into the recent spate of crimes.

They have a male Barbadian suspect in custody.

He’s being held in connection with an attack on a safari tour with tourists at Chance Hall St Lucy and the subsequent theft of a car on the East Coast on January 30.

The man is also being questioned in connection with Monday’s daring armed robbery at Warrens in St. Michael, and the robbery of a group of tourists later that same day at Spring Vale in St Andrew.

The police are seeking the public’s assistance in tracking down a St. Michael man who escaped police custody at the Boarded Hall police station.

Inspector Hunte says Headley eluded police at around four thirty Thursday afternoon. He was wearing a black and grey half white stripe shirt, a three quarter length blue jeans and he was bare-footed.

Police say a pair of handcuffs was attached to his left wrist. Anyone knowing his whereabouts is asked to contact the nearest police station.