Knowing what we now know about the CL Financial and CLICO collapse, bailout and cover-up by the current Barbados government, we look back to David Thompson’s use of the CL Financial – Clico executive jet. When we wrote this article in February of 2008, we wondered what price Barbados citizens would pay for the “free” jet…

“Corporations and individuals do not loan biz jets to governments or government members out of the goodness of their hearts. When the details of such arrangements are kept secret from the citizens, there is opportunity for abuse and corruption.”

In light of what we now know about CLICO, the bailout, the PM’s refusal to place CLICO under judicial control, no criminal investigation against Parris or Duprey, Parris appointed to head the CBC and everything else – perhaps those things are part of the price that Bajans are paying for Thompson’s biz jet rides.

Ain’t nothin’ be free, my friends. Nothing. END_OF_DOCUMENT_TOKEN_TO_BE_REPLACED

Concern Over Uncontrolled Immigration To Barbados: Reasonable or Racist?

Journalist Peter Wickham and Barbados Underground Duke It Out Over Immigration

For a guy who relied upon Barbados Free Press and Barbados Underground to publish his stories when the news media censored him during the election, Peter Wickham seems to have a short memory. Once again Wickham’s Nation News article alludes to the blogs but doesn’t mention them by name.

Ho hum… That’s OK Peter. We’ll still be here and willing to publish you the next time The Nation News censors your work…

… because we blogs are committed to freedom, not expediency.

Thompson Says: Forget About Murder And Oppression, Castro Is A Great Guy! 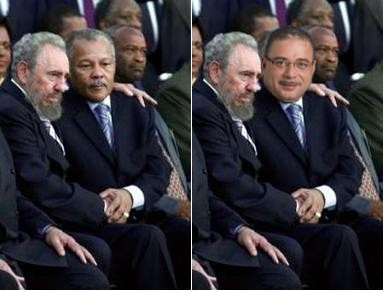 Thompson Praises Castro As A Vanguard For Freedom…

Thompson said Castro’s legacy is in the example he gave to all small island nations.

“We value very much its friendship with the people of Cuba and wish to place on record our acknowledgment of the contribution that Fidel Castro has made to the development of Cuba, but also to the perspective of the right of small nations to self determination,” Thompson said…

The next time that Prime Minister David Thompson sees his great friend Fidel Castro, he might want to ask the dictator about Orestes Suárez and his wife Nancy González García. They made the mistake of opening a free library in their home to allow Cubans to read non-censored books and magazines. (link here or click photo)

That’s just one story that the PM could mention – there are thousands of similar tales online.

But David already knows that.

Once again, the beggar nation of Barbados not only keeps silent about all manner of oppression, murder and slavery – we praise the despot.

A damned shame. We had hoped for better from the new Prime Minister.