Does Anyone Know What Happened To Stephen Grant?

Ten months ago, Twenty months ago, Barbados Underground, The Nation and Barbados Free Press covered the story of Stephen Grant – a young man with a curable disease called cellulitis. But Stephen was not being taken care of and was not receiving the drugs and treatment that could cure him.

Okay… it is now ten twenty months and two Health Ministers later. Has the Democratic Labour Party government looked after Stephen Grant any better than the BLP government (which did nothing for him).

Well? Does anyone know? Perhaps some of our DLP supporters can give us an accurate status report…

The approach to Runway 19 Left at Netaji Subhash Chandra Bose International Airport in Kolkata, India sometimes brings you over the Hooghly River. If you have the luxury of being a passenger or of sitting in the jump seat you can take the time to look down upon some of the most depressing slums in all the world including Howrah of “City Of Joy” fame.

A few years ago, Calcutta (the tenth largest city in the world) changed its name to “Kolkata” in a move of ethnic cultural supremacy that is still hotly debated in the city and throughout India. Only eight years ago I was stuck at the airport for two days waiting because the fuel bowser crew and the fuel depot crew (who were ethnic Bengalis) weren’t speaking to each other over the name change.

But whatever the ruling party decided and thought they achieved with the name change, the world still says “Calcutta” and probably will for the next hundred years.

In the minds of those who have been there, even for only a day or two, the word “Calcutta” often brings on a feeling of despair at how we fail to look after our brothers and sisters who suffer from diseases that could easily be cured for a few dollars worth of medicine. It doesn’t matter how many National Geographic documentaries you’ve seen, you have no idea of the extent of the suffering that exists in this world until you have seen the reality of Calcutta.

But that is Calcutta, not my Barbados.

So why when I visited Barbados Underground this morning and read about a young man named Stephen Grant, did I immediately have a flashback to the time I spent in Calcutta? 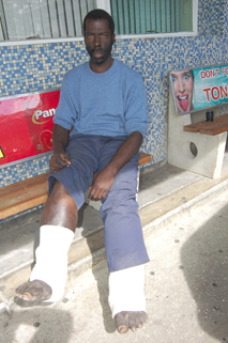 END_OF_DOCUMENT_TOKEN_TO_BE_REPLACED

Another Reminder That The Caribbean Is Not One Country And Culture…

Gunmen last night slaughtered around a dozen persons in a major assault on Bartica reminiscent of the Lusignan massacre and the dead included at least three policemen, reports this morning said.

The hour-long strafing which saw the criminals overrunning the Bartica Police Station and residents locking up in their homes raises major questions about the aims of the gunmen and the ability of the security forces to respond.

While it was difficult to obtain precise information on the chaos that ensued, Stabroek News has been able to confirm as best as possible the names of some of the dead. They are: Edwin Gilkes of Banks DIH/Citizens Bank’s premises on First Avenue; Mervin Ferreira, a guard of CBR Mining and Marcus Gonsalves, a teller of Citizen’s Bank whose body was found in his car on First Avenue. The surnames of the dead policemen have been given as Osbourne, Zakir and Fredericks.

The Lusignan murders shocked the Caribbean as even children were slaughtered.

Here is a website that provides insight into the Lusignan murders and the background.

Warning: Although the website seems to be the most complete source for information about the Lusignan murders, it contains photos of the dead victims in their home.