This Could Happen Anywhere… But It Happened In Barbados

You bring your family to Barbados for the vacation of a lifetime and you decide to rent an auto to have a little independence as you tour the island. So… you call up a local car rental agency and soon they deliver an auto to your hotel or bed and breakfast.

They give you the car. What do you give them?

You give them your credit card number, the hotel where you are staying, your home address and phone number and the date that you want to return the car.

You have just informed a perfect stranger that you are away from your home and when you will be returning.

Our source says that the Royal Barbados Police Force have recently investigated four incidents where tourists rented autos and then returned home to New York and New Jersey only to find that their homes had been broken into while they were in Barbados.

Maybe. Maybe not… but at least one tourist doesn’t think so, and they also believe that they are getting the runaround from the RBPF.

The Barbados Workers Union is talking a nation-wide strike next week and has set Sandy Lane Resort squarely in their sights. The BWU leadership know that they couldn’t be offered a better opportunity for worldwide attention and public sympathy than afforded by that playground of the ultra rich.

The images during a strike will be powerful: low-paid black maids and labourers vs. filthy rich white foreigners at a resort where a round of golf and dinner can cost the same as most ordinary Bajans take home in six months.

Then throw in 18 sacked workers at Sandy Lane – who will claim that it is all about union busting.

With optics like that, the real reasons behind the dismissals and the strike will soon be lost in the public mind. Image is all on the side of the Barbados Workers Union.

A similar situation at the Royal Shop where 12 employees were dismissed is powerful on Barbados but nothing compared with the worldwide attention that will result when the international media start listing the names of the beautiful people who play at Sandy Lane.

I had to laugh at the quotes from Barbados Hotel and Tourism Association President Alvin Jemmott that the day chosen for the nationwide strike – Wednesday – is the worst day because it is the busiest tourism day of the week. (Nation News article here)

Ah…. Yes, Mr. Jemmott: that is precisely why the BWU chose Wednesday for the strike.

Is Sandy Lane Flying In More Staff To Operate During The Strike?

We understand that Sandy Lane has been ordering triple and quadruple quantities from local suppliers for weeks now – stocking up for the strike. Obviously they don’t want their clients to be without their Grey Goose vodka and “organic” Caviar de Riofrio.

What is curious is the Sandy Lane announcement that all will be normal for their guests because they have made an “emergency plan”.

Unless they have enough skilled workers willing to either cross the strike line or stay at the resort, it seems to us that things will be anything but normal at Sandy Lane. Barbados is a small island and it is highly unlikely that locals would dare cross the lines to work during a national strike.

…Which leaves open the door to imported labour to replace not only those who were sacked, but also the staff who will not cross the line during a national strike. We’re thinking kitchen staff and other higher functions. Sandy Lane can operate short staffed for a few days in housekeeping and gardening, but without skill kitchen and bar staff the party is over! 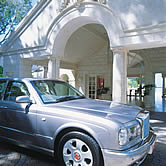 We expect that a few guests will come and go via helicopter, but the usual parade of Mercedes limos will not be able to enter or leave Sandy Lane.

IF Sandy Lane and the Royal Shop are not able to come to an agreement with the Barbados Workers Union, we don’t believe that a one day strike is the last we will hear of the troubles. So far all are digging in their heels and we can’t see that changing before Wednesday.

As for me and what I’ll do on Wednesday, maybe I’ll get me some of that Grey Goose and de Riofrio and see how the other side lives.

CBC: No Resolution In Labour Disputes

A Letter From DLP Election Communications Director Reudon A. Eversley

After reading contributions on this blog, even though my role as Communications Director for the DLP was specifically related to the General Election Campaign and officially ended with the conclusion of this event, I wish to assure the BFP family that the DLP Government is serious and committed to improving public communication.

The government agency responsible for communicating with the public is the GIS. However, if you checked the GIS website during the past several months, you would have noticed that the news there was very dated. Clearly, this has to change. That may have been fine under the BLP, considering their approach to public information, but it can’t be business as usual. The former regime was more interested in propaganda than having a genuine dialogue with Barbadians. As soon as the PM’s new press secretary is fully settled, I expect that you will see a pro-active approach where public communication is concerned.

The GIS should be and must be the focal point for news and other information about what is happening in government, pretty much like how the GIS in St Lucia was when Dr Kenny Anthony was prime minister. Within an hour, say, of Dr Anthony delivering a budget speech, the document would be posted on the website for the public to access. I see no reason why the same cannot happen here in Barbados.

Regarding updating the DLP blog, that matter is being addressed and you should see some activity pretty soon. I must tell you, however, that already the DLP Government has honoured a campaign pledge related to improving public communication by introducing press briefings after Cabinet meetings. Unheard of during the Owen Arthur era. Rome was not built in a day. The DLP’s main focus during the past month was putting in place an administration, getting reacquainted with the machinery of government, and settling down to press ahead with the people’s business.

Rest assured that public communication by this government will be better than under the BLP. You know; the DLP sees itself as the people’s servant. Hence, the commitment to accountability, openness. The BLP, on the other hand, always behaves as if it is the people’s master. Well, massa day done long time ago!