Cost Overruns Were Not Incompetence: They Were Theft

My friends, for the past 14 years we have seen one major government project after another double, triple or quadruple in cost with no accounting ever given. Whatever the BLP government touched seemed to go bad – think GEMS Hotels, the office at Warrens, giving out millions of dollars of weed-trimmers (purportedly to “help” young men start “businesses” trimming rich folks’ lawns like their grandfathers before them), Greenland dump (50 million spent so far and not a piece of garbage can be put there until another 20 million is spent), Kensington Oval (150 million and still no lights so Barbados was embarrassed before the world) and so many other failed government projects.

Recently we’ve seen the debacle over the new jail built by the corrupt VECO Corporation and the ABC Highway and Flyover project being built by the 3S Structural Steel Solutions bunch of crooks who are facing fraud charges over kickbacks on a previous bridge project in Jamaica.

Why Do Our Government Projects Cost So Much?

Gather round, children – and Uncle Marcus will tell you the story of how your Prime Minister, his Cabinet and other BLP supporters arrange government projects so as to siphon your tax dollars from the projects into their secret offshore bank accounts in Europe, the USA and Africa.

The Prime Minister and his gang have created a method of stealing money that is so slick you’ll have to think about it for a while even if we describe it fully.

The ABC Highway project is only one example of many – but it is a good one. 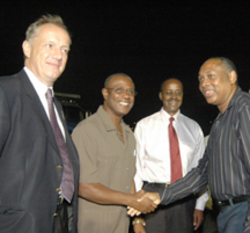 Firstly, Owen Arthur and the gang chose a foreign company to be the prime contractor. That company, 3S Structural Steel Solutions, had never built anything when chosen by the Prime Minister in a behind-closed-doors meeting.

There are two reasons for choosing a foreign contractor:

1/ The contractor is based in a foreign country so payments from the government are made to bank accounts outside of Barbados. This is important because the Prime Minister’s gang doesn’t want the kickback payments to the politicians to be made within Barbados – for obvious reasons.

2/ The foreign contractor must be willing to take a portion of the monies received from the Barbados Government and divert the monies into a channel that eventually ends up in the offshore bank accounts of Barbados politicians.

Obviously, 3S Steel Solutions met both criteria. Its President, Jonathan Danos, is corrupt and recently even admitted it! In a sworn affidavit before a UK court, Mr. Danos explains how he paid huge bribes to politicians’ middlemen so that the governments of Jamaica, Dominican Republic and Panama would award the contracts to his employer at the time: Mabey and Johnson Limited.

So Jonathan Danos would say yes to providing kickbacks to Prime Minister Owen Arthur and others in exchange for the ABC Flyover project.

The second part of the plan was realized when 3S Structural Steel Solutions was created in 2005 as a new company working out of a single room in the USA.

Step 2 – Have A Relative Or Friend Set-up A Consulting Company In The USA, UK, Caribbean, Asia or Africa

Here’s where the fun starts. You see, the politicians don’t want 3S and Jonathan Danos to write them a cheque directly – even if it is coming from the 3S in the USA to the politician’s account in, say, the Channel Islands off the UK.

What the politicians do is to have a front person incorporate a company for them in some offshore banking haven. The front man’s name appears on the company records, but the Prime Minister’s name doesn’t appear anywhere.

Do You See How It All Works?

1. Government awards a large project to a crooked offshore contractor.

5. After losing the election, Owen Arthur lives abroad where the “consulting company” pays him big money for, well, consulting!

6. Even if the new DLP government is suspicious, the trail from tax money to the Prime Minister’s pocket is long and daunting. Danos and 3S probably have many legitimate “consultants” working on the flyover project, so sorting it all out would be extremely difficult.

There you go folks, the perfect theft of millions of tax dollars by the Prime Minister.

If you think that scenario is unlikely, you are living in some fairy tale land.

“You’ve Got To Be Joking… Throw The Crooks In Jail!”

That was our first reaction to Keltruth Blog’s article about giving amnesty to the BLP crooks who have been raping Barbados for 14 long years… AND ESPECIALLY AFTER THOMPSON’S BRILLIANT EXPOSE LAST NIGHT.

The DLP shark smells blood in the water and the party is honing in relentlessly on a wounded BLP.

But then I read the article at Keltruth Blog and now I’m not so sure that throwing the guilty Owen Arthur and others in jail would be the proper way to handle things. Assuming that the evidence is there (heck, there should be enough to convict Arthur a dozen times) perhaps we should allow the Prime Minister to pay back what he stole while in office.

After reading Keltruth Blog, I just don’t know what we should do with these crooks.

What do you think, folks?

WKDX FM 103.9 broadcasts out of Rochester, New York in the good old US of A. The station’s founder, Andrew A. Langston, chose the call letters for the station to represent some famous folks that we all owe a debt of gratitude to…

All of which tells you a little bit about the people behind the station and the focus of the programming.

WDKX thinks that the DLP Integrity initiative is important and they have worked up some programming around it.

Owen Arthur and the gang just don’t get the fact that the world pays attention to what goes on in our little island. The BLP continues to act as if everything they do is done in secret instead of on the world stage. A day of reckoning will come, Mr. Arthur. Oh yes, it will come! And what you going to do when they trace down your offshore bank accounts?

You can read what WDKX has to say at their blog… 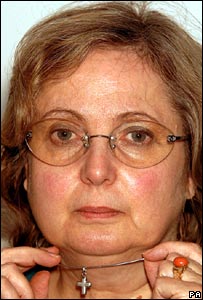 “I will not hide my belief in the Lord Jesus. British Airways permits Muslims to wear a headscarf, Sikhs to wear a turban and other faiths religious apparel.”Only Christians are forbidden to express their faith.I am a loyal and conscientious employee of British Airways, but I stand up for the rights of all citizens.”Nadia Eweida – BA employee suspended for wearing Christian cross.

We first told you over a year ago about a British Airways employee who was suspended for refusing to cover up a small Christian cross on her necklace. Nadia Eweida fought the BA discrimination, but now a UK court has agreed with British Airways – saying that Christians must cover up while Sikhs and Muslims can continue to wear outward signs of their faiths in the form of turbans, hijabs etc.

As far as I’m concerned it is just one more indication of British society in chaos.

As far as British Airways is concerned, they will be my last choice from now on.