We Publish All The Documents: Barbados Director Of Public Prosecutions, Police Sgt Paul Vaughan And The Blank Search Warrant Scandal

The story is worth a re-visit because nothing has changed.

Lawyer and newspaper columnist Stephen Alleyne chimes in on the law of landlords and tenants in his recent Barbados Advocate offering. Here’s how Mr. Alleyne starts out…

“The last time landlord and tenant issues came under scrutiny in this column, I took quite a bit of stick from a number of people who clearly were landlords who had had bad experiences with tenants. Most of them for some reason felt it was the landlord who needed protection against the tenant, and not the tenant against the landlord.

However, if those people were to examine closely the laws of Barbados relating to landlords and tenants, they would find that, except for the Tenantries Freehold Purchase Act, which has given security of tenure to qualified tenants of house spots and established a mechanism for increasing their rent, the laws have not been kind to tenants.”

We’d like to take this opportunity to remind Mr. Alleyne that laws don’t matter a damn in Barbados when a corrupt Director of Public Prosecutions can use a corrupt police officer to break and misuse the law to collect a private debt from the DPP’s tenant… and the Barbados news media ignores the whole episode even though all the documentation is posted online.

If you want to write about landlord and tenant issues with any credibility Mr. Alleyne, you cannot ignore Ms. Juman’s case when the documents are posted online.

So go ahead, Mr. Alleyne. Read the documents and then make your decision to write about the case or to remain silent.

There is no middle ground… 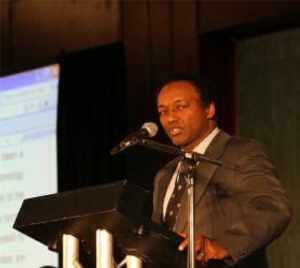 In the early hours Tuesday, December 19, 2006 – a few days before Christmas – officers of the Royal Barbados Police Force descended like a gang of wild thugs upon the sleeping family of Mrs. Ronja Juman. * (Mrs. Juman’s first name is spelled two ways in various court documents “Ronya” and “Ronja”)

Her offense was not having paid back-rent to her landlord – who happens to be Charles Leacock, Queens Counsel, and the Director of Public Prosecutions for the sovereign nation of Barbados. One of the most powerful men on the island, Mr. Leacock arranged to have officers of the Royal Barbados Police Force collect his back rent from Mrs. Juman – in particular a corrupt police officer named Sgt. Paul Vaughan.

Sgt. Paul Vaughan ignored his oath of office and befouled himself, his fellow officers and the Royal Barbados Police Force by allowing his authority to be corruptly used to collect a private debt for the Director of Public Prosecutions, Charles Leacock.

When Sgt. Vaughan and his police officers entered Ronja Juman’s home, terrorised her sleeping family and dragged her off half-naked to the police station for a vaginal search and interrogation over Mr. Leacock’s unpaid rent, they used a blank, pre-signed search warrant – a highly illegal act.

Barbados learned about all this and more when an unknown person created JusticeBMine blog and posted Ronja Juman’s statement online along with most of the case documents.

Justice B Mine blog didn’t last too long before Mrs. Juman’s statement and all of the documents were taken off line. The blog still exists in cyberspace, but it is nothing but a gutted shell. Here is what it looks like now. You can click on the picture to go to the Justice-B-Mine blog to see for yourself… 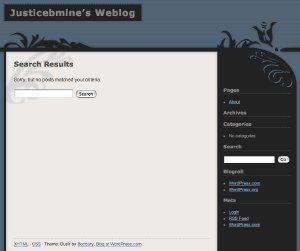 Here is what it looked like before it was gutted. Click on each thumbnail to see full size…

BFP Copied All The Case Documents Before Justice-B-Mine Blog Was Destroyed!

Fortunately, Barbados Free Press made copies of all the case documents and the entire website before somebody deleted it, so we are now going to repost all the documents online in this article.

For background and to aid in studying the documents, readers can refer to these earlier BFP stories of the Ronja Juman case…

Sept 26, 2007 Barbados Government’s Propaganda Response For Director Of Public Prosecutions – “Ronja Juman Is A Thief, A Whore, A Druggie – She Deserved It”

The Documents That Damn The Director Of Public Prosecutions, The Police, The Judiciary & Chief Justice David Simmons Himself…

Click on each thumbnail to view the full sized document…

68 responses to “We Publish All The Documents: Barbados Director Of Public Prosecutions, Police Sgt Paul Vaughan And The Blank Search Warrant Scandal”