First the Barbados Government had Adrian Loveridge fired as a part-time journalist writing a weekly column for the Barbados Advocate newspaper. Adrian asked all the wrong questions in his articles and had the nerve to compare what government ministers said a year ago with their current statements, actions and results. (See Cowardly Barbados Advocate Newspaper Caved To Screaming Government Minister)

Then the government Tourism Minister refused to do an interview on the live Brass Tacks radio show if Loveridge was part of the discussion panel. When the radio station’s listeners insisted that Loveridge be part of the panel, the Tourism Minister blustered and threatened and had Adrian Loveridge placed in another studio as the Minister refused to be in the same room and breathe the same air as the banned journalist. (See Barbados Minister Of Tourism Dictates To Cowardly StarCom Network – “Adrian Loveridge Not Allowed On Brass Tacks Radio Show Panel”)

During that talk show, the host (David Ellis) made the mistake of reading an email from a listener who asked Minister Noel Lynch how he became a millionaire in just three years on a government salary. (See Barbados Tourism Minister Storms Off Radio Show – Audio Now Available!

When the dust settled on that one, Ellis had apologised for doing his job, the radio station handed over some sixty thousand dollars to the Minister and promised to never again ask any government member about their personal wealth. (See BFP’s Cowardly Voice Of Barbados Radio Promises To Never Again Ask How Politicians Become Overnight Millionaires)

Then Adrian Loveridge had a really bad day… there was an arson at his hotel, a burglary into the hotel’s kitchen and a ladder was placed up against his bedroom window in the small hours of the night… all within 24 hours. That’s quite the message to any journalist to “back off”! (See BFP’s Arson, Burglary, Bedroom Spying – Three Separate Incidents Make A Bad Day For Fired Barbados Journalist Who Is Critical Of Government)

Meanwhile, the official government BLP Blog happily connected to and featured another blog that makes continual death threats against Adrian Loveridge, his family and his hotel business.

Light At The End Of The Tunnel For Banned Journalist? Not So Fast!

BFP readers were mixed in their response to the job offer of a column for Loveridge at the country’s largest printed circulation newspaper. Would the newpaper censor what Adrian wrote? Would he be limited in topics?

But Adrian said that he had been assured that he would have as much free reign as is possible under Barbados’ archaic libel laws. Besides, as some readers pointed out, Adrian isn’t very original in his writing. Most of his articles follow the pattern “The minister said this a year ago (insert quote) but now is doing this (insert news story).

Hardly the stuff of libel, but more effective journalism than Owen Arthur and his bunch of crooks can take in the light of day.

The “Light At The End Of The Tunnel” Was A Freight Train Of Government Censorship!

Our optimism that the Nation News had finally developed some journalistic integrity lasted about a week. Today we learned that the publisher of the Nation News, Roxanne Gibbs, refused to publish any column by Adrian Loveridge. Here’s what Adrian wrote on our blog…

First of all my very sincere thanks for all the objective comments. While I had thought through some of the implications, BFP readers have also raised a number that frankly I had not fully appreciated.

Anyone, the decision process has been taken out of my hands.

Roxanne Gibbs, according to Hartley Henry has refused to publish my column.

I cannot say that I am altogether suprised, especially in the light of the pressure placed on Anthony Bryan at the Advocate.

Thankfully we still have BFP and Barbados Underground.

Don’t worry Adrian, we’re still happy to publish your article at Barbados Free Press. After all, BFP is the number one online news site in the country… even surpassing the Nation News audience by almost 30%! (See BFP’s One Source: Barbados Free Press Online Readership Stats Higher Than All Other Barbados News Sources!)

Harold Hoyte At Nation News: Integrity Not An Important Character Trait To Be Prime Minister Of Barbados

There is a whole lot of truth in some of what Harold Hoyte says today in his Nation News column Make-over Time, but Hoyte’s thoughts about honesty and integrity being nice but not important are why this country is going down, down, down.

Rampant corruption is also why your great grandchildren will likely still be paying for the thieving that has characterised the Owen Arthur government for almost 14 years. Integrity, honesty and adherence to the law are not “nice to have” or “optional” to the person who holds the Office of the Prime Minister of Barbados. These traits are foundational to how the country will be governed.

Hoyte is so representative of the thinking that is destroying our Barbados and our children’s futures.

Source: Barbados Government To Call Referendum Vote For November 28, 2007 – Or Is That A Snap Election Date?

A source who has once before given valid information to Barbados Free Press informs us that the Government of Barbados will be calling a referendum to be held on November 28, 2007.

The source does not state the subject of the referendum.

Is This Information Real Or… ?

OK folks… someone out there knows more – including whether or not this bit of information is true, or if it is a set up to discredit the blogs. We wouldn’t put it past the government to provide us with true information on one occasion only to suck us into printing a false story on the next occasion.

But isn’t it great to be able to talk about all this like we were sitting on the beach?

So… let’s hear what our readers have to say…

Is there a referendum coming on November 28th?

What is it about?

What is it REALLY about?

We are reminded that back in September, a source informed us that the planned November 2007 election date had been pushed back to March 2008. Could it be that the government now doesn’t see things getting any better between now and March, 2008 – so they have decided to go for it and hope for a majority no matter how slim? (See BFP’s Sept 2, 2007 article Sources: Barbados Election Now Delayed From November 2007 to March 2008)

Hold on to your hats, folks! The tips and comments are coming fast. 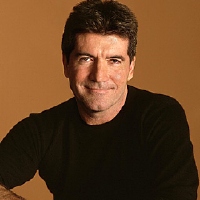 Television producer and star Simon Cowell has purchased two pieces of property in the new Four Seasons Clearwater Bay project in Barbados. (Project website is here) According to an article in Times Online (link here), Mr. Cowell intends to merge the two properties. Hmmm… that should be one nice villa!

But by a strange trick of fate and Google Alerts, the Simon Cowell story wasn’t the only article about Four Seasons and Cinnamon 88 resort builders that arrived on our desk today. It seems that Four Seasons and Cinnamon 88 are building another resort in Grenada and have already started bulldozing the habitat of the few remaining Grenada Doves – the national bird of Grenada. There are apparently fewer than 100 of these birds that remain in existence and the Four Seasons project will destroy about half of the birds’ remaining natural habitat.

I wonder if Mr. Cowell knows that his resort developers are doing such a thing in Grenada? I wonder if he would care… but you can contact him about it if you like at his MySpace page. (Log into MySpace.com and then search for Simon Cowell – or click here)

Despite assurances by both the Grenadian Government and Four Seasons / Cinnamon 88 that nothing will happen until environmental studies are done, aerial photographs like the one above show that assurance is a lie. The bulldozers are well into it. (Sigh… why do governments and businesses like Four Seasons conspire together to lie to citizens?) 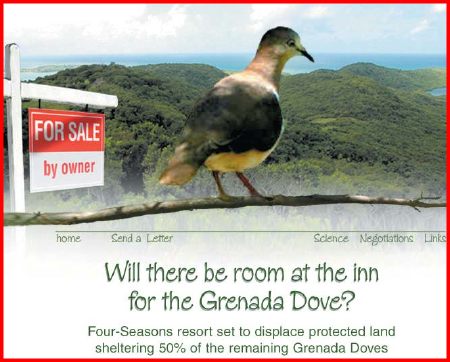 In the case of Grenada, it turns out that the government is planning to sell part of their Mt. Hartman National Park to Four Seasons to be developed. On September 17, 2007, the American Bird Conservancy (link here) submitted a detailed critique of the project to the Government of Grenada, Four Seasons, Cinnamon 88 and it’s parent corporation in the UK, Capital 88 – but the developers ignored this report and are forging ahead.

Also see the website of the Protect The Grenada Dove Campaign for some very revealing background information (link here or touch the above photo).

One has to wonder if the lies being told in concert by the Government of Grenada and Four Seasons/Cinnamon 88 are standard operating procedure for the corporation. As we saw with the VECO scandal, it is possible for a corporation to actually have a corporate culture of corruption and dishonesty. With the unethical actions of Four Seasons / Cinnamon 88 in Grenada, one has to wonder if their Barbados corporate culture is any different.

Which brings us to our Barbados National Park… you know – the one we don’t have yet but that the vast majority of Bajans would like to see proclaimed at Graeme Hall, Barbados. As the sad tale in Grenada shows us, there are short-sighted people everywhere who value the dollar so much that they will rape their own county’s natural heritage without a second thought.

A Word About Google Alerts

We often write about Google Alerts and how they deliver such little Gems of news right to our computer. If you are interested in any topic and haven’t yet discovered the power of Google Alerts, we urge you to explore this powerful (and free) internet tool. The Google Alerts (Beta) page is here. Wikipedia has an article about what and how Google Alerts function link here.