Sex, Love And Betrayal At The St. Lawrence Gap

Matthew was taken aback. “I don’t mean to hurt you, Tasha, but face it. We haven’t been on the same page for a long time.”

“Stupid me, I thought we were on the same page for the last eight years,” she retorted hotly. “Do you know I actually thought you were going to propose to me tonight?”

By this time, couples at nearby tables were staring in their direction. Out of the corner of her eye, Natasha saw the hostess approach and she waved her away. The woman gave Natasha a worried look and retreated.

Matthew had the decency to look ashamed. “I’m sorry, Tasha. I didn’t mean to mislead you. Things just…happened.”

… A scene at the St. Lawrence Gap from the novelette “Trading Hearts” by Bajegirl (link here)

After years of warning Shona about her collection of softback romance novels, saying “Not a ting good be come a dem”, this makes twice that Auntie has been caught out reading romance stories by Bajegirl at her Cheese-On-Bread! blog.

Give it up, Auntie Moses… You can’t resist the hotty stories at Cheese-On-Bread! any more than Shona and her friends can!

Opera Telecom
In early July I became increasing concerned over a series of TV ‘ads’ that were being aired at almost saturation frequency on CBC Channel 8.

The ‘ads’ invited viewers to respond by text or telephone at a cost of BDS$2.30 per call with a selection of possible answers to various questions. A classic example was: ‘What is the capital of Barbados?’

While the conditions of the competition were shown in very small print and literally flashed on the screen, it was absolutely clear that the operators were a company called OPERA TELECOM.

I emailed the company in the United Kingdom and an Ms Joanne Nugent responded as GM (General Manager) of Opera Interactive Caribbean showing a local (Barbados) telephone number (230 6742) and a UK Fax Number (44) 0870 046 9668, which is in fact the FAX number of the Birmingham headquarters of Opera Telecom and the website address of Opera Telecom (www.oitg.com).

As you may be aware Opera Telecom has recently been fined a record GBP 250,000 for rigging a premium rate competition phone line on behalf of GMTV.

Media reports estimate ‘callers were cheated out of GBP 20 million over four years’.

‘Opera Telecom was ordered to pay a full refund to complainants and banned for managing competitions for a year’.

You can get some idea of media response to the events simply by typing Opera Telecom on GOOGLE News.

In the last but one email response Ms Nugent has categorically stated that Opera Interactive (Barbados) Ltd has absolutely no connection to Opera Telecom.

Frankly, I find this difficult to believe as the TV ‘ads’ shown on Barbados clearly display Opera Telecom and you will see by the four separate emails I am forwarding that Ms Nugent has on at least one occasion copied our emails to the CEO of Opera Telecom, Garry Corbett.

Over the last few days yet another competition Barbados Lucky Numbers has started to appear both on CBC Channel 8 and half page print ‘ads’ in the press.

Again, respondents are requested to call or text at a cost of BDS$2.30, yet no company is listed as the operator of the competition.

As with the previous Opera Telecom competition, no list of winners has been published and the public has absolutely no idea what funds and profits were generated from this promotion.

I would be grateful for your comments.

Sent by email and printed letter and copied to Senator Lynette Eastmond, Minister of Consumer Affairs and the Office of Public Counsel. 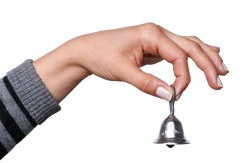 Queen Elizabeth Hospital staff contacted Barbados Free Press with the following that speaks for itself:

I would like to provide an update to your September 29, 2007 story “Barbados Government Triumph: Little Brass Bells Issued To Bedridden Hospital Patients!”

The bells are gone having been taken or lost and the patient call system is still broken. Help!

Seriously ill patients at one ward at the Queen Elizabeth Hospital no longer have to moan or throw bedpans to attract a nurse. Each patient has been issued with a small bell.

Oh… wait a minute. The bells didn’t come from the government, they came from the Cardiac Support Group when the government decided that repairing the broken electronic nurse alert system was not a priority. END_OF_DOCUMENT_TOKEN_TO_BE_REPLACED

Today’s story of government workers not being paid is nothing special… just more of the same.

Like all the past articles on the same subject.

When you have spent all the rent money on booze and fast women, something has to give. It’s the same way with government: when you blow a third of a billion dollars on a cricket party, the teachers have to wait.

TEMPORARY TEACHERS who have not been paid should receive their salaries before the end of next week.

This assurance has been given by Permanent Secretary in the Ministry of Education, Atheline Haynes, who told the WEEKEND NATION yesterday evening there was “a problem” regarding the payment of temporary teachers “at a number of schools”.

“The Ministry of Education is apologising for the delay,” she said. “Every effort is being made to ensure all teachers affected are paid by the end of next week.”

Tuesday was pay day and the WEEKEND NATION understands that teachers at more than 30 schools have been affected. Some of them have been working for more than five years.