To The Person With The Pink Paper…

TO THE PERSON WHO SENT US A PINK SHEET OF PAPER

Give us 24 hours exclusive for reasons that will become obvious tomorrow.

Something big happening and have to wait 24 hours.

Folks, this message is another one of those housekeeping communications that have to be posted when we can’t email… and we don’t dare email at this moment.

Barbados Government’s Propaganda Response For Director Of Public Prosecutions – “Ronja Juman Is A Thief, A Whore, A Druggie – She Deserved It”

Please take the time to read this article so you can understand something that will be happening at Barbados Free Press later today. We want you to know the background so you can clearly see the Government’s current strategies to deal with BFP and also the government’s attempts to defuse the situation involving the DPP and police thuggery against Ronja Juman and her son.

The Government Attacks Against Barbados Free Press Continue – With A Twist

As our regular readers know, for the past few months Barbados Free Press has been inundated with thousands upon thousands of vile comments designed to shut down freedom of speech, especially our readers’ discussion of government corruption and other vital issues. In response, for two months BFP staffed the comment moderation almost 21 hours a day in four shifts. But we have real jobs and families, so that couldn’t be a permanent solution.

Through sources and our own enquiries, we know that these attacks were coordinated and that they were carried out by agents of the Government of Barbados. (For any doubters, read on to the end of this article and your doubts will be gone)

Agents of the Government also put up their own blogs with names similar to BFP – the idea being to piggy-back upon BFP’s Google hits and popularity to continue the attacks against free speech. The same people who established those blogs and flooded our comments section with vile filth also made violent threats against BFP’s writers, a local business owner and a DLP candidate and their families and homes.

A few weeks ago, we were forced to put Barbados Free Press on “moderate all comments”. The attacks continued, but it was easier to list the spam once an hour, dump it and then post the rest of the good comments.

The number of comments declined, but average daily readership soared with our first print edition – and has stayed right up there. In fact, two days ago we welcomed visitor number 1,500,000 (1.5 million) and moved to the top 20 on the WordPress Top Blogs list. Not bad for a nothing little part time blog out of an island with a population smaller than most US cities!

At current traffic levels, over 3 million people will visit Barbados Free Press in the next 12 months from all over the world. And that is not counting the folks who read a paper or emailed edition of BFP!

The coordinated government attack with the strategy of posting thousands of vile comments backfired and caused us to do something different – the print edition – and that resulted in unprecedented visitor growth.

Then three days ago, the vile comments stopped.

We used to receive dozens of vile, threatening comments from three or four IPs in an obviously coordinated attack, then as soon as we blocked the IPs, the attackers would establish new internet routes and go at it again in a contest of will that ran 24/7 for months.

They were there, and then they weren’t. Similarly the government blogs became dormant with no new attack “articles.”

Someone Ordered The Attack Campaign Against BFP To Stop

How foolish those coordinating the attacks against BFP have been! The fact that the vile comments stopped all at once is proof enough for any doubters that the attack was a coordinated effort.

For the past three days, we have had the comments section wide open again with no moderation and not one vile comment has been posted!

Why did the attacks stop? That’s easy… someone ordered that this form of attack was to stop.

Now that we have mentioned how the attacks suddenly stopped, there will probably be a few more – but it is too late. Our readers have seen proof with their own eyes that the attacks upon Barbados Free Press were coordinated!

The people attacking BFP made a public mistake and showed the world that the attacks were a coordinated strategy.

The same government agents have now adopted another tactic – trying to influence the debate by posting single comments from one IP before moving on to another IP and posting a supporting comment in a different name.

Here are two comments posted an hour apart from two IPs. Both are by the same writer. How do we know that? We’ll have to defer on the public explanation for now, and it will have to be sufficient just to say that the government agents made some other mistakes that Cliverton picked up on.

Notice how these and other similar comments on the Ronja Juman articles imply that the writer has confidential or “inside” knowledge or knows Juman. This is insidious propaganda designed to divert the attention from the actions of the Director of Public Prosecutions, the police and Juman’s involvement with a man who appears to have been misusing his position to defraud the government of import duties and VAT.

The strategy is obvious… The government hopes to defuse the situation by saying that Ronja Juman * (Mrs. Juman’s first name is spelled two ways in various court documents “Ronya” and “Ronja”) deserved what happened to her because she is a thief, a whore and a druggie. Previous comments spoke of “inside” knowledge that the police action was really a drug raid, and that’s why the vaginal search at the police station.

Read the BFP articles yourselves, folks. Look at the documents posted online at the Justice B Mine website. Make up your own minds. We have examined all and find that the police nighttime raid, naked vaginal search, interrogation and criminal charges are all about back rent owed to the Director of Public Prosecutions.

I don’t know Ronja Juman. She might be a thief, a whore and a druggie for all I know…

… or not. But that has nothing to do with the Director of Public Prosecutions misusing his authority, the police and the courts to harass and intimidate a person so they will pay him back rent on his apartment building.

Here are the propaganda posts from the one government agent. There are many similar comments already posted, and you can expect more of the same…

What a story…but it is not strange to me…..a story has 3 sides..

I am familiar with this woman…..for the time I knew her she told that story of her husband…..but I realized that both of them were ideal for each other….they both both rented houses over the years and moved out without settling the bills….I remembered the condos and apartment owned by my friends at sunset Crest St. James..the matter called for extreme action to recover the rent arrears…

This woman is a stranger to the truth…she is a con-woman…her skin is pretty ….she looks at sex as nothing more than a plaster on a cut….

Have you seen how she recalled those events….she mentioned all the names….what do think de Rev…was doing come on!….he was her man..she entertains for money….she tricks you ….uses you….and most most men who are ignorant will be trapped….

Both husband and wife were charged one time for larceny of diamonds…..I wonder if them is de same diamond now in de picture…

Things does ga round in circles…..dum get off then by technical err…but de diamonds dis still at large…..and ya remember na…..de police like dem get trapped in bed…….soft skin woman

Justice B Mine blog (link here)

The Broken Trident’s Weblog Talks About Controlling The Slaves And Political Corruption – Nietzshe, Anyone? 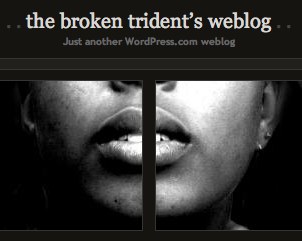 New Barbadian blogs are popping up all over the place these days. Its probably enough to drive a certain elected official to the bottle if he wasn’t already Mount Gay’s best customer.

The Broken Trident blog is so new that the ink hasn’t dried on the screen yet, but he or she has something worthwhile to say.

Why don’t you stop by and have a read? If we visit two or three other blogs a day, THEY will never be able to stop the discussion. If one blog goes down, two more will start.

From The Broken Trident’s Weblog…

“Any radical movement can be easily managed. All that is necessary to control it is to open occasionally the trap-door between masters and slaves and let the leaders of discontent come up into paradise” -Nietzshe

As one BLP blogger quoted. As our history has shown us it is the influential, the highly educated and members of the socially elite that have lead this country. In these times of political corruption it is even more important for us as a nation to look back at our origins, not as far back as Africa per say, but to the origins of this country and what it was founded on…

… continue reading this piece at The Broken Trident (link here)