The 24 hour news cycle has long forgotten the hurricanes that slammed the Caribbean – but the Royal Navy is still providing aid and a foundation for rebuilding the hardest hit areas.

Bajan Reporter: British Navy is Main Anchor for Hurricane Relief in the Caribbean

Your Child Is Sick: Welcome To Barbados Queen Elizabeth Hospital

“I don’t know how much the government spent on Cricket World Cup, but every time I go past that big white elephant Kensington Oval I think of my son and all the tears and fear over that filthy, falling down slum we call our hospital. 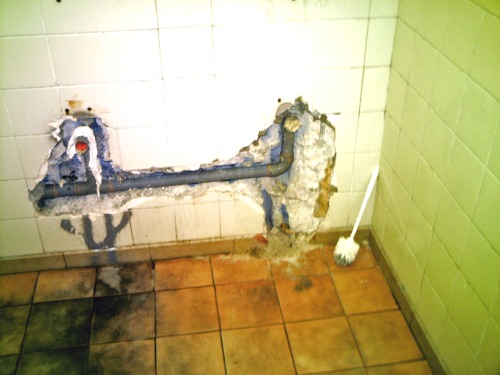 My son almost died at QEH this year. I won’t give you the details because I don’t want any reprisals for writing you with the story of his “medical treatment” at the Queen Elizabeth Hospital. Please edit my letter and change the words so no one knows it is me that wrote to you. (editor’s note: done)

Every day I or one of the family stayed with my son and kept him clean and brought him food. This was necessary because of the lack of food, bad food when it came IF it came and the lack of trained nurses and supplies. Especially supplies.

None of the ward toilets where my son was had paper, none had soap or paper towels for drying. Everyone must bring their own.

I had to buy “Intrasite gel” for my son’s wounds because the hospital had none that they could give me after 3 days. This was $20 a bottle and it only lasted a few days because I and my friends ended up changing the dressings ourselves when we found they were not being changed enough. I had to buy a box of sterile gloves to change his dressings. I bought a small package at first but the nurses kept “borrowing” the gloves because they were short of gloves so I bought a box.

Doctor? We never saw a doctor but once. We didn’t want to leave my son alone for one minute, but then they force you out and you worry for the whole time knowing what is what in that place.

I took photos but I was caught one day and forced to erase them by a nurse. From then on I took the photos secretly. I have many more than I am sending to you but with those they would be able to identify me or my son.

The first series of photos is taken in one of the washrooms and it is typical. It is not the worse washroom I saw but it is not in my son’s area and it was one where I had my camera.

Look at the first photo. (Editor’s note – above at top)

THIS IS A WASHROOM FOR PATIENTS AT OUR HOSPITAL!

What Excuse Could There Be For This Filth In Our Hospital?

For ten days I walked down the corridor and saw the same piece of garbage on the floor. Here is a picture of it (ed: circled by BFP). Look at the missing floor tiles with the floor tile glue exposed probably for years. Sticky to catch any filth and germs. Impossible to clean. The same with the wall board trim missing with the sticky glue there to breed germs. (ed: red arrows by BFP)

The “old” elevators are boarded up with old sheets of wood. Birds and insects flying everywhere. No screens. They never heard of modern inventions like screens I guess. Put your ear to the “old” elevator shaft and it sound like a jungle of birds. What filth that must be behind those sheets of wood. No worries by management about Bird flu, flies crawling on the sick or washrooms that aren’t fit for a dog’s use let alone MY CHILD.

The “new” elevators were barred with disused gurneys and a dirty old shipping platform. How filthy the gurneys were! I could not get a close photo without getting caught (that was one that was erased by the nurse.) It looked like blood to me and who knows what else.

After several incidents in the elevator I used the stairs like most of the staff who know what is what. The stair wells are filthy more so than the corridors. Here is a photo of looking out at what is nothing less than a pit of garbage tossed by people on the stairs. How many years since it was cleaned up? Five? Ten? Your guess is as good as mine.

What Medical Professional Would Choose To Work At QEH If They Had Another Choice?

Where has all the money gone? Where are the hospital management and Board of Directors?

I don’t know how much the government spent on Cricket World Cup, but every time I go past that big white elephant Kensington Oval I think of my son and all the tears and fear over that filthy, falling down slum we call our hospital.

The Government big-ups has lots of money to spend, and spend they do. But they don’t spend money on the important things for the small person. I don’t want a BMW but no bus. I don’t want highways going everywhere, but no sewer service and bad water. I would have given my home everything and anything I had to make my son well and not take him to that filthy place we call our hospital.

Kensington Oval & My Son’s Toilet At The Queen Elizabeth Hospital

UNITED NATIONS, Sept. 17 — The World Bank and the United Nations announced Monday that they were setting up a system to help developing nations recover assets stolen and sent abroad by corrupt leaders that amount to an estimated $40 billion a year.

“There should be no safe haven for those who steal from the poor,” Robert B. Zoellick, the bank’s president, said in presenting the plan with Secretary General Ban Ki-moon.

Mr. Zoellick estimated that the overall cross-border flow of global proceeds from criminal activities, corruption and tax evasion was $1 trillion to $1.6 trillion annually, and said that even a small portion of that could provide financing for much-needed social programs.

He said that every $100 million recovered could pay for immunizations for four million children, or provide water connections for 250,000 households, or finance treatment for a year for more than 600,000 people with H.I.V. and AIDS.

The problem of stolen assets is most acute in Africa, where an estimated 25 percent of the gross national product of states is lost to corruption, he said.

As a percentage of gross national product, I don’t believe that Barbados could come close to Africa for corruption – but we’re really working on it!

“If Things Are So Grand, Why Is The IMF Around Again?” A BFP Reader Writes…

Well this is my first time writing to you guys, not sure what the procedure is, but I hope I can get some of this info online to those who may not already know.

For the the sake of those who are not already aware, what happens in Barbados on the political level is not by chance. The exploits and mis-adventures of our political representatives is merely a symptom of the greater problem. Yes greed and corruption are the order of the day when it comes to these dubious “projects” around the island and D/BLP (yes that is intentional, I see no distinction) and associates are wholly aware of what is wrong.

There are powerful forces shaping the socio-political landscape of this and other caribbean islands, and our government “leaders” are not the innocent puppets they will claim they were when the truth finally comes out. The tactic is to keep the population distracted enough with mindless diversions, the youth with the entertainment and elders with established religion (not to be confused with true spirituality which I will go into later if I am allowed). Keep your population divided and disorganized, continue to fuel the xenophobia of peoples of our region (Trinidad, Guyana?) and promote the love of the true foreigners “up north”.

Sell your infrastructure and base your economy solely on fickle industries (tourism anyone?). A few questions should be on our minds (amongst others I should hope)…

– If things are so grand why is the IMF around again?
– If not the barbadian people who does Owen truly answer to?
– What was the true motive for Kensington Oval?

Any way thats just some food for thought I hope I can post more in the near future, some really serious stuff.