Taking A Lesson From Stephen Wiltshire

When I think of the human spirit and the wonder of humanity, sometimes I get a little disillusioned, especially when I see the amount of crap the detractors post on your site.

However, I came across the following site, which I thought extremely enlightening. Mr Stephen Wiltshire, was born in London in 1974 to St Lucian and Barbadian parentage. Diagnosed as autistic, it was discovered that he was a savant when he was placed in a school for special needs and one particular teacher recognised his talent.

He is also known as “the human camera”.

It does appear that the government has hired people to attack us 24/7. We’ll have to find more time on this end for moderating, but that is a small issue compared with the number of folks that are hearing about Barbados blogs for the first time.

If this was the government’s reaction over one little sheet of paper, we must make the next one bigger and better!!!!

To the Government: You want to attack Freedom of Speech and Democracy in Barbados?

BRING IT ON SWEETHEART!!!!

Filed under Barbados, Blogging, Freedom Of The Press 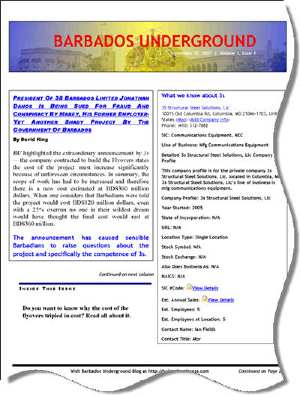 Our friends at Barbados Underground launched a Print Edition of their blog today – a four page masterpiece that focuses on the Kickback and Fraud Scandal involving Jonathan Danos, President of 3S Barbados Limited, the company that is building Barbados’ way-over-budget flyover and highway project. This news story is being hushed up by the Barbados government and mainstream broadcasters and newspapers.

There is no doubt that a copy of this new BU print edition will be on the desk of every government minister tomorrow morning – but that is nothing compared with the number of copies that will be distributed throughout the island by concerned citizens.

Last Monday, Barbados Free Press launched a print edition of our blog. The idea came from one of our readers. We don’t print the news flyer ourselves – we create it in an easy to download .JPG file and post it online. Our readers access the online news flyer and then print copies out at home or work so their friends and family members who don’t have internet access can read Barbados Free Press stories.

BFP readers have also been leaving the flyers all over so strangers will pick them up and read the news that they can’t get in the mainstream Barbados media. Readers have posted comments telling how they left BFP flyers on buses, on the ZR, in washrooms at work, at KFC and on the windshields of parked autos.

The idea is so simple, yet so revolutionary and powerfully effective.

By using readers as our printing and distribution network, Barbados blogs are now able to reach a far larger audience than ever before possible – ordinary folks who lack internet access.

The government monopoly and control over the news ended when hundreds of ordinary citizens handed their friends one of the blog print editions and said, “Have you heard about this?”

Since September 4th, the Barbados news media have been crawling on their bellies and refusing to print the story of a scandal that calls into question the integrity of the flyover contractor and the government’s credibility for hiring a person accused of fraud and kickbacks on another government project. Now ordinary citizens are reading about the scandal and asking why the media have intentionally ignored this important story.

Yesterday, Tuesday, our sources told us that the government and the media are “stunned” by the implications of a Barbados Free Press print edition. Closed doors at the Nation News and CBC. Yelling and fist slamming in the halls of government… and anger in the halls of justice.

And worst of all – conversations between government and media as to what should be done.

Think about that. Media and government sorting out their response strategy together.

Disgusting – and further proof that our cause is just.

And Then There’s The Prime Minister’s Reaction…

It is our information that a “livid” Prime Minister Owen Arthur ordered that the editors of the Barbados Free Press be found, and that “cost is not an issue“.

For some time, both government and contracted resources have been working day and night (really… all night!) to find us and take down the blog.

But Mr. Arthur has a problem.

Soon, many thousands who might not have even heard of Barbados Free Press before will be looking forward to each new print edition – handed to them by friends and family – or found on the ZR.

What are you going to do, Mr. Prime Minister? Put them all in jail? Hunt them all down?

Perhaps, Mr. Prime Minister, you might consider simply not interfering with citizens as they discuss issues in a free and democratic society as is their God-given right?

… because there is NOTHING you can do to kill the Barbados Blogging Movement.