When The Police And Government Fail To Stop Local Drug Dealers… 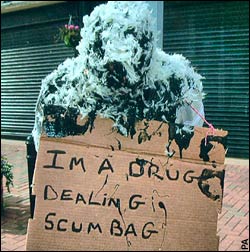 No, I don’t recommend this in Barbados, and yes I’m aware that Irish politics might have come into play…

… but for a moment I thought of some of those evil young men who sit on a stone wall in a certain St. Peter location.