Barbados Bloggers Hunker Down For Hurricane Dean (Sorry CNN – We Can’t Do A Live Interview Either!) 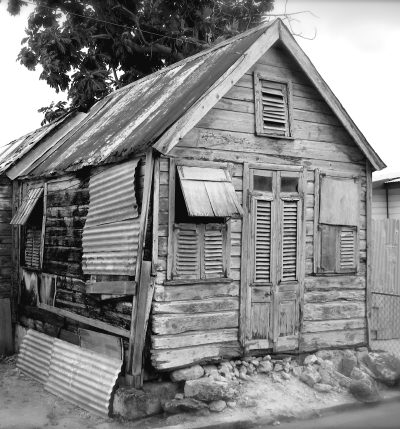 I started getting out the window and door storm boards yesterday only to find that all the wingnuts were rusted in place. Yeah, I guess it has been a while since we’ve had the need. Shona spent today running around gathering up a few last minute items, but we are fairly well prepared because we’ve been having water problems for … oh, five years now, so we always ALWAYS have a week’s worth of water on hand anyway. (Yes we are connected to the Barbados Water Authority system – not that it makes much difference about 30% of the time.)

Shona also picked up her Auntie Moses who lives in what can best be described as the remains of two chattel houses held together by paint and prayer… not exactly hurricane shelter quality. Our home is much more substantial, but I hesitate to describe it more fully because – well, you know why.

When we built this place we spent a considerable sum beefing it up “against the day”. I guess this might be “the day”. A few years back our aviation guru Robert did some calculations and determined that if the wind hits from a certain direction the roof will act like an airplane wing and try to fly. We put double the required storm straps (to secure the roof to the walls), but this will be the first test… Hopefully not too much of a test as Dean is supposed to pass to the North.

The family boat is as secure as it can be and like everyone else we’ve stripped it of everything that can be removed and then some. If it goes, it goes. I wish we could have removed the engine but there wasn’t time or tools to make it happen. Damn… I put new injectors in that baby last fall. Oh well, as long as everyone is safe, that’s all that counts.

We have eight people at our place so far and I expect a few more so I’ll have to go soon because only a few know that I’m one of those BFP folks.

Two points before I go…

Mark, we’d love to give you a live on the air blogger’s broadcast from Barbados Free Press as you asked, but unfortunately that would be the end of my real job, my wife’s job and the bank would probably call the mortgage too. You see, Barbados Free Press is a blog dedicated to exposing corruption in our government and we have to remain anonymous or our families will be made to pay. That may be a different perspective on Barbados from what you now believe, but if you spend 15 minutes reading some of our past articles, you’ll get the picture.

At Barbados Free Press, we believe that knowledge, transparency and accountability are fundamental to a healthy democracy, and that these qualities are lacking or in danger in Barbados.

Unfortunately, our Deputy Prime Minister declared that “blogs marginalize Parliament“ and the government has been hunting political blogs to shut us down any way they can.

As you will read, Barbados journalists are intimidated, physically assaulted, arrested or threatened with legal pummeling by police and government politicians if they step out of line. “Stepping out of line” includes asking a Government Minister on the air how he went from rags to millionaire in three years on a government salary – or how it is that a Government Minister ends up building his house on land the government expropriated for “public housing”. In Barbados, reporters had better ask the police for permission to take photos at a traffic accident, or the senior police officer will assault the reporter, rip the camera off his neck and delete the photos.

And maybe you’d better have a fire bucket ready if your articles aren’t pro-government.

So… we’ll have to remain anonymous like most of the other Barbados blogs you have contacted. (See Barbados Underground CNN story here)

That tells you something about the Barbados government, Mark. Perhaps when this hurricane is over CNN might find some other Barbados stories of interest to your audience and we’d love to point you in the right direction.

For a United States connection, try searching “VECO” in our search box and you’ll see that the same Alaskan company that is mired in political bribery charges in the US is very active in Barbados too. Yes, we’d love to see the FBI have a look, but the last time they came to Barbados the Prime Minister sent them packing.

Barbados is famous for our Chattel Houses – small homes originally designed to be portable as folks moved from one plantation to the next. So many of us still live in these old homes that when a real storm threatens we have thousands of folks who are unable to trust their homes to even a relatively small storm. Well, what are neighbours, friends and relatives for if you can’t spend the night hunkered down praying, drinking rum and playing cards. (In this home we all pray, but Auntie Moses refuses the rum or cards) 🙂

The photo at the top is a chattel house in Bridgetown that is “known” to some of the folks who blog at BFP, and it fairly represents the construction and condition of many of the homes on this island.

Look at the home – 70 years old at least that we know of. Say “hurricane” and then wonder why it is still standing after all those years. Call it luck, call it answered prayers – but that’s life on Barbados.

Here’s what we wrote about that home last June. JUST IN CASE we get hit hard, you might want to remember that there is more to life than things and money…

Bridgetown Memories Of A Loving Home

Back when Barbados was just born as an independent nation, the folks who lived in this home never had much. Always enough to eat, but seldom anything more. It never seemed to make no matter though because there was so much love and laughter in this tiny home with the holes in the walls and the drips from the roof.

Shona hopes the people who live there now are as happy as others were.

See you in the morning!

6 responses to “Barbados Bloggers Hunker Down For Hurricane Dean (Sorry CNN – We Can’t Do A Live Interview Either!)”