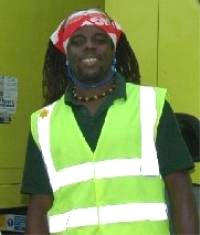 Yup, Matthew Carter Sure Looks Like A Unrepentant Racist To Me!

When Matthew Carter moved from Barbados to Britain in 1999, he was apparently unaware that the display of the British Flag and St. George’s Cross in the flag makes him an offensive racist.

The fact that he was wearing it for seven months while working as a binman for Pendle Council must have lulled him into a false sense of security that the Brit flag or parts of it could reasonably be expected to be displayed while in Britain. Told that his George Cross headgear was racist and offensive, Carter is now wearing a Pirate Skull and Crossbones bandana instead – with no problem from the morons at Pendle Council.

While I abhor physical violence, reading about Mr. Carter makes me want to grab each member of the Pendle Council (including Ian McInery – the Council’s operational services manager) and take them fishing for a few hours on the good vessel Tolrica out of Oistins before she had her bottom redone in February of 2006. Just take them out to the east shark deeps and leave them there in that leaking sieve.

Yup. That would be my solution.

The Lone Voice: Binman Banned From Wearing St. George’s Cross. A Case Of “Get Carter”

Thanks to Caribbean Press Releases.com for sending us a copy of Canadian Prime Minister Harper’s statement about his visit to Barbados.

Let us sum up Prime Minister Harper’s statement for you…

“Prime Minister Arthur and I had a wonderful chat. I have promised that our two countries will chat again in the future. I am facing an election soon and so is the Bajan PM, so part of the deal is that we have to stand here and look statesmanlike.

I’m really pissed that he slapped me in the face over the Cuba comment.

Now… get me outta here and off to Haiti where I can show concern and reap some real votes from Haitian-Canadian immigrants in the coming byelections. Where’s my limo?”

Statement By Canada’s PM Harper On His Visit To Barbados

July 23, 2007 — Prime Minister Arthur and I had a very cordial and constructive meeting during which I stressed that Canada’s New Government is committed to strengthening the Canada-Barbados relationship.

We view Barbados as a key partner in the region. We enjoy long-standing commercial relations and cultural ties. This year marks the 100th anniversary of the Canadian Trade Commission here.

Today our shared objectives include economic growth, security cooperation, and regional cooperation in the Caribbean.

Prime Minister Arthur and I had a good discussion on regional economic integration and the main challenges facing small Caribbean states.

I assured him that Canada intends to develop a new partnership with CARICOM members to provide support for economic renewal, security challenges and democratic governance.

Canada will have a sustained high-level presence in the region; will engage more actively with its key regional partners; and we will display leadership within regional organizations and institutions.

As I mentioned, this year marks the centennial of the Canadian Trade Commissioner Service in Barbados.

I would like to thank the Government of Barbados for agreeing to partner in the conference that the Canadian Manufacturers and Exporters association will be holding next January to mark this centennial.

Prime Minister Arthur, on behalf of our government, I would like to thank you and the people of Barbados for your warm welcome and hospitality.

‘… you should see prices falling between the next four to six weeks and particularly for Crop-Over,’

This was the prediction made by Minister of Tourism, Noel Lynch, on 24th June 2007 when responding to the drop in Intra Caribbean travelers due to higher airfares and carried in a Wendy Burke, Nation story! (The Nation News: Arrivals ‘Should Go Up’)

So with less than two weeks to go, have we yet seen any reduction?

Below are the lowest bookable return fares on LIAT’s website for travel in one month (24th August) from Barbados with all fares quoted in US$.

Barbados Crop-Over Used To Be About This…

Crop-Over Used To Be A Time For Thanks And Celebration

Wuking-Up was unheard of. Weeks would pass without seeing a motor car drive by Grape Hall. And at this time of the year folks would celebrate Crop-Over – but not before they thanked the Lord for what had been given.

That wasn’t so long ago. I’m not that old!

I enjoy Crop-Over still, but like others I think that we have gone too far in a certain direction.

Don’t get all excited… I don’t want to spoil the party. I merely think that we should say “thank you” before we get drunk.

Roy Morris Told To Resign From The Nation News ! ?

So begins one of the four emails we have received from four different IP numbers in the last few hours.

The emails go on to talk about a police investigation and cover-up. Instructions to police officers from higher ups to ignore the complaint of the young lady.

What is the truth?

Folks… all we have is four emails – apparently from four different sources judging by the language and details.

Is it a set-up to discredit the Barbados Free Press? Is it the truth? Is it a partial truth?

Whatever the story, you can bet that we won’t read what really happened in tomorrow’s Nation News!

How Many Weed-Wackers And Lawnmowers Can You Buy For Three Million Dollars?

“Why does the Government believe that the only way to empower young black men in this country is to give them landscaping tools to go and cut de same lawns that their parents and grandparents cut wid a hoe twenty years ago?”

I could not contain my angry bewilderment when I read in the Sunday Sun of July 22 that “The block just became a much better place for young Barbadian men. Soon they will have access to another million dollars from Project Oasis which Government formed in 2004 in an effort to urge the youth to become more entrepreneurial.” (The Nation News: $1m for ‘block’ boys)

This $1 million dollars is in ADDITION to the $2 Million dollars already allocated to this project. Now I have no problem with the Government creating programmes to empower youth, but I cannot accept that this Boys on the Block Committee could have funded nineteen projects for youngsters who had previously limed on the block to a tune of $3 million dollars!!!! That is a massive financial outlay, and represents roughly $157,000 per project!

Where Were The Weed-Wackers Purchased From?

And if these projects consist of handing out “equipment to start their landscaping business,” I would like to know exactly where they bought this equipment, and how in the world that nineteen sets of landscaping equipment could cost over a hundred and fifty thousand dollars per set. The more I read and reread this article, the fishier it became…

The latest handover involved the donation of a lawnmower, leafblowers, weed wackers and a tree trimmer. Also visible was the Government’s candidate for the area in question, George Griffith, who is attempting to replace Michael Lashley, the current Opposition MP for that area. Again, I ask, why is another Government election candidate being associated with the distribution of equipment/cash in his desired constituency. Isnt this a massive conflict of interest? Why couldn’t the invisible and hopefully non partisan members of this “Boys on the Block Committee” take the lead in selection and distribution of this equipment?

The goodly Minister Wood has vowed that “members of the Boys on the Block Committee would continue to traverse the country looking for special young men with business on our minds.”

de Boys on de Block? Whatever happened to “de Boys in de Books”?

1. Who is responsible for the administration and dispersal of the $3 Million dollars allocated to this Project Oasis?

2. Is some kind of follow up conducted when this equipment is handed over to ensure that it is being put to the use intended, and has not fallen into disrepair with the same Boys now back on the block?

3. Is the Government aware that there are many young, ambitious and positive young people in this country who are not career block dwellers and who would like the opportunity to become entrepreneurs? Does the ruling party believe that young people of this country are so superficial, misinformed and easily co-opted as to fall for this obvious and poorly executed public relations stunt to gain our favor? Young people in this country can’t afford to buy groceries, let alone house and land, but this Boys on the Block Committee is roaming the country and giving away $3 million of the taxpayers money to who they feel like.

4. Why does the Government believe that the only way to empower young black men in this country is to give them landscaping tools to go and cut de same lawns that their parents and grandparents cut wid a hoe twenty years ago? With this kind of attitude, we the majority will always be relegated to the workers but will never become the craftsmen of our fate.


It is an insult to me as a young Barbadian that $3 million dollars of taxpayers hard earned money can be squirreled away in this Project Oasis programme with no requirement for financial records or accountability, when I, an honest, gainfully employed young person struggle to make ends meet on a daily basis.

Even a third of that $3 million could have done the following:

1. Pay the RBPF the outstanding monies due to them for CWC duties

2. Create a primary housing programme for a number of young,working Barbadians who have been unable to afford reasonable house and land in this island. (This is 20 houses using the former Ministry of Housing and Lands $50 000 house proposal from which NOT A SINGLE HOUSE has materialised.)

3. REPAIR AND REOPEN THIS NATION’S ONLY PUBLIC LIBRARY AND ALSO A NATIONAL TRUST BUILDING INSTEAD OF WASTING THOUSANDS OF TAX DOLLARS IMPROVING SOMEONE ELSE’S PROPERTY AND THEN PAYING THEM EXHORBITANT RENT ON THAT IMPROVED PROPERTY. (AND IT STILL IN OPEN YET!!!!!)

4. Create a scholarship trust for young, deserving, ambitious Barbadians who are pursuing further education but who are financially unable to meet the costs of that education. The first image that comes to mind is the bright little girl that is the carwasher’s daughter who was assisted with her education by private donors.

The next thing I will pick up my paper and hear is that the Government subsidising the importation of weed for the Boys on the Block….s o that in the words of Minister Wood “The youth of Barbados can be in the right frame of mind.” I.e. so high and so numb that we don’t rise up and revolt against the wholesale large-scale sale of this island.