Through a Global Voices story, we’ve come across Weblog Bahamas.

One of the authors shares our opinion of that despot Castro and his Communist thugs.

But that’s not the only reason we like Weblog Bahamas.

Check out this well-written blog at: WeblogBahamas.Com

I have often stood at the western end of the runway at Grantley Adams International Airport, watching the takeoffs and landings. (Although I have to admit that this activity isn’t half as exciting since the last Concorde landing.)

You can practically reach out and touch the aircraft as they land or takeoff and the truth is that, as with so many other airports, if a Baptist or Seventh Day Adventist terrorist had a rocket and wanted to use it there is little that could be done to stop the attack.

Our Robert is out there flying today, so we are following the aviation news for the next week.

The world has changed and will continue to change.

And it just changed again for some folks in a residential neighbourhood in Jersey City, New Jersey, USA…

Ian Bourne at Bajan Reporter has the story and the links. 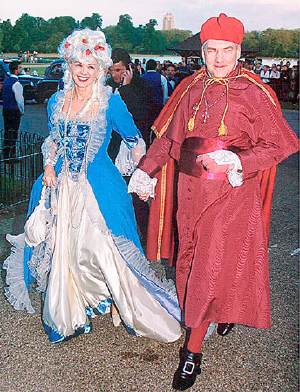 Somebody Knows Where The Money Is!

Chicago-based Hollinger International Inc. and Toronto-based Hollinger Inc., two companies that Lord Black used to control, hired private investigators more than a year ago to assess the full extent of his personal wealth, sources said. The companies are suing Lord Black for hundreds of millions of dollars of allegedly improper payments, and last week’s guilty verdict on some transactions strengthens their claims against him.

It is also understood that the U.S. Justice Department has informally probed Lord Black’s international assets and has been informed about the Hollinger searches. Any evidence of undisclosed offshore accounts could affect a hearing in Chicago Thursday on the terms of Lord Black’s bail.

Prosecutors have already alleged that he has not provided the court with a full disclosure of his financial holdings, and they have asked for his bail to be revoked and for him to be put in jail until his sentencing hearing in November.

Lord Black has been linked to offshore accounts in the past. A report by a special committee of the board of Hollinger International Inc. said Lord Black co-owned two Barbados companies, Moffat Management Inc. and Black-Amiel Management Inc., which received millions of dollars in payments.

A private holding company, Toronto-based Ravelston Corp. Ltd., controlled by Lord Black, also had connections to a couple of offshore entities. According to court filings, Ravelston had a subsidiary in Barbados called Argent News Inc. and another in Bermuda called Sugra Bermuda Ltd.

… read the entire article at the Globe and Mail (link here) 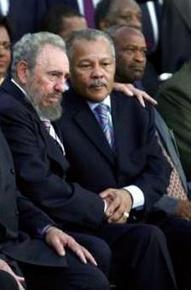 Speaking today in Barbados about Cuban human rights violations, Canadian Prime Minister Stephen Harper said that he will not be visiting Cuba and that the current and previous governments of Canada have often “expressed concerns about certain aspects of governance and human rights in Cuba.”

In contrast, Barbados Prime Minister Arthur expressed the opinion that the Cuban people chose the murder, torture and totalitarian rule. In response to Harper’s comments about human rights in Cuba, Owen Arthur delivered this message…

He said “civilized relationships” between civilized countries were not based on teaching lessons but on “respect for people’s sovereignty and non-interference and the right for people to pursue alternative paths to their development.”

Prime Minister Owen Arthur previously staged a photograph holding hands with Fidel Castro – to show public support to the communist dictator who enslaved Cuba and jailed, tortured and murdered citizens for their political and religious beliefs for the last 47 years. Owen Arthur proudly received the Cuban Order Of Jose Marti and has taken Barbados ever closer to Cuba without any mention of human rights issues in that country.

Prime Minister Harper and his government continue to engage both China and Cuba in economic relationships, but that hasn’t prevented Harper from mentioning human rights abuses in those countries.

The Barbados PM on the other hand goes out of his way to remain silent about both Cuba’s and China’s murderous regimes.

Stephen Harper is obviously a realist, but he stands tall as a man who at the very least does not remain silent about the oppression of his fellow human beings.