“I live in Christ Church and welcome the water park coming to Graeme Hall because of its accessanility. (sic) I also speak for many of my neighbors who look forward to this healthy and exciting venue for local bajans and tourist alike. I have read in your blog that the Graeme Hall Bird Sanctuary is slipping away from the National Park proponents. I believe this is very good since it presents you with a very sticky wicket. So perhaps the great majority here will get there water park finally.”

Mr. Lawrence Loughlin, the uncle of waterpark developer Matthew Kerins, has used his real name to lobby for the waterpark on Barbados Free Press since early May of 2007. In his posts under his real name Mr. Loughlin indicates that he has a formal role in the effort to bring the Caribbean Splash Waterpark to fruition and that he speaks for the project. His actual title with Caribbean Splash is not known to Barbados Free Press but it is obvious from his comments that he is playing a role in the project and is privy to inside knowledge.

But Mr. Loughlin has also been deceitfully posting comments throughout Barbados Free Press under various other names in support of the waterpark, the government of Barbados and Prime Minister Arthur.

In several of these false posts, Mr. Loughlin indicated or implied that the commenter is a citizen of Barbados. His latest deceptive post is shown at the top of this article.

This effort by the Caribbean Splash waterpark developers to unethically interfere with the public discussion of their project in Barbados is only the latest in a series of questionable activities. In a big mistake while speaking in public last year, Mr. Kerins stated that he has spent some US$2 Million on “consulting fees” and that he and his “facilitator” (our word, not his) Leonard Nurse met with Prime Minister Owen Arthur – who gave his royal approval to the project.

Kerins further stated that the Barbados Government “cannot back out of the deal”.

What deal is that, Mr. Kerins? 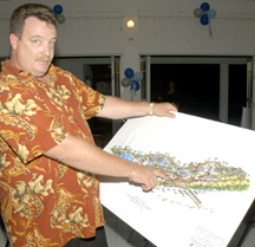 Citizens of Barbados want an accounting for every penny of that US$2 million dollars that Matthew Kerins has spread around for “consulting fees”. We want to see the receipts with the names.

Kerins and Loughlin have also been touting a study that they did supposedly showing that the vast majority of citizens are in favour of plunking the waterpark right down in the most environmentally sensitive watersheds in Barbados. Ya, right!

And we just know that Kerins and the boys wouldn’t deceive us, would they? But let’s see the study and all the source and reference materials.

Citizens of Barbados are not adverse to foreign capital and developers. Just don’t lie to us, use deceitful techniques to interfere with public debate or think you can spread money around Barbados for “consultants” without accounting for it publicly.

Lawrence Loughlin Banned From Barbados Free Press Until He Apologises

Mr. Loughlin, you have been caught deceitfully posting under different names to mislead readers at Barbados Free Press.

We welcome debate and discussion by all here, but there are rules and you broke one of the biggest – honest debate by persons of good will.

You are banned from posting comments under your name at Barbados Free Press until our readers receive your public admission and apology.