How About It Mr. Arthur, Mr. Thompson?

Please declare publicly if either of you or members of your families have ever directly or indirectly received any monies or benefits from VECO – no matter what they were called at the time. Whether a “campaign donation” or a “fact finding trip” to Alaska, the citizens of Barbados have a moral right to know what was given and what was received by those who hold public office.

We realise that we have no legal right to ask this – because the two of you and your parties have deliberately failed to enact such laws in Barbados for decades.

Didn’t We Net Millions For Sugar From That Last Guilt Trip We Laid On The European Union?

It worked so well last time that we should try it again.

One truth though: This money will never touch a farmer’s hand.

Gotta pay for them flyovers somehow!

PORT OF SPAIN, Jun 8 (IPS) – Convinced that agriculture holds the key to the socioeconomic development of the Caribbean, regional leaders have drawn up a project list totaling almost 300 million dollars for regional and international donors to help transform the sector.

FAO Director General Jacques Diouf said that at least 200 million dollars would be needed from external sources to kick-start the initiative.

“Together we can overcome hunger and poverty in the region,” Diouf said. “But the financial constraints imposed by inadequate national budgets and the high indebtedness of many countries of the region call for a greater commitment of external donors in a concerted effort to achieve the financial objective.”

Are you aware of the level of fraud and corruption taking place at the Queen Elizabeth Hospital? I am sure you are, so does this make you an accomplice to the crime?

My sister was an outpatient of Dr. __________ Gynecology outpatient clinic at the QEH for the last two years. She suffers with fibroids. Every month my sister would bleed for 10 to 15 days, so much so, she became very anemic. She was supposed to have the surgery to remove the fibroids since late 2004. Every time the date for surgery came around the doctors would find some excuse to postpone. She had her surgery postponed four times. Over this period my sister became weaker and could not perform her job to her employer’s satisfaction and her employer was very annoyed that she had to take 3 to 5 days off work every month. Eventually my sister lost her job.

I could take it no longer and I offered to help pay for the surgery privately. I has to take out a loan from the bank. My sister spoke to the consultant in charge and while he was not able to perform the surgery for the last two and a half years because she was a public patient, however, he was able to perform it within 5 weeks of her asking him (If he was not going on holiday she would have had it within 2 weeks).

I am happy that my sister’s fibroids have been removed and she is finally regaining her strength, however, I am unhappy about the fact that she is a tax paying Bajan and was given the run around. If this is news for you she is one of 100s being subjected to this criminal act.

I have a 74 year old uncle who experienced similar treatment at the hands of the eye doctors at the QEH. He was waiting years to have his cataracts removed, he waited so long he even went blind in one eye. His cataract surgery was only done after the scraped together the 1000s of dollars to have the cataracts removed privately. This is not right.

I understand that 1000s of Barbadians are having their surgery put off because they don’t have the money to pay the hospital consultants their astronomical sums for their fees to have the surgery privately. Don’t try to deny this is happening because you only appear to be a liar and a fool when you try to fool the public.

These thousands of Bajans have many family members who are aware of what is happening. Every time you try to fool us we just shake our heads and laugh, because we know that you could not be looking out for the small man. If you fail to address this issue in a meaningful way between now and the next election we the voters of Christ Church South with exercise our right to place our X where it belongs next election day.

Bridgetown Memories Of A Loving Home

Shona Wants Everyone To Know…

Back when Barbados was just born as an independent nation, the folks who lived in this home never had much. Always enough to eat, but seldom anything more. It never seemed to make no matter though because there was so much love and laughter in this tiny home with the holes in the walls and the drips from the roof.

Shona hopes the people who live there now are as happy as others were. 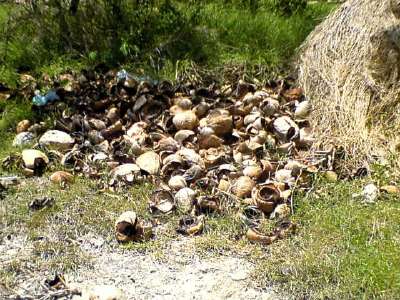 Bajans Love That Sweet Milk – But Hate The Mess

The coconut vendor who calls himself “MAN” is at the crossroads in front of Mia’s new investment every Sunday. Shona can’t watch him but the boy loves to.

He wields his machete not so much like a weapon or a tool but like a hand or an arm. The blade is a part of his body and it is truly wondrous to watch him work. MAN knows a rotten coconut by it’s sound as the blade hits to pick it off the pile. Sometimes he doesn’t even open it to confirm what his ears have already told him.

His half-tent doubles as a bar for locals to talk and there may, just might, be something other than coconuts for sale IF you are known.

MAN always cleans up because it is his corner and he must keep it clean or the locals will complain.

But after he loads up his trailer, where does he take the empties? To Mangrove Pond or merely down some old road?

A warning MAN… Ian Bourne and his boys are on the lookout and they will get you fair and square unless you do what needs to be done.

PRESS RELEASE: Coconut Vendors Welcome at Landfill even on Sundays – no need for illegal dumping!

The Sanitation Service Authority (SSA) is again appealing to all coconut vendors to dispose of their shells at the Mangrove Pond Landfill every day of the week.

The landfill is open on Sundays for coconut vendors, as the SSA is aware this is their busiest day – Sanitation wants to see the shells at the landfill only and together we help keep this island clean.

Recently there have been instances where piles of shells have been found in many secluded areas across Barbados.

Dumping is a criminal offence that involves a steep fine, time in jail or both – Sanitation invites all coconut vendors to bring their shells Monday thru Sunday to the Mangrove Pond Landfill and keep Barbados clean!