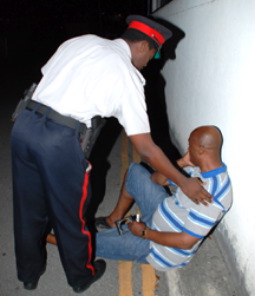 Our comments section is open folks. Barbados Free Press will be responding with an editorial later.

From the CBC… (link)

A freelance photographer with the Caribbean Broadcasting Corporation was arrested Friday night and charged with trespassing while on assignment at the Queen Elizabeth Hospital.

Jimmy Gittens appeared in the District A Magistrate Court Saturday morning to answer those charges and is out on bail.

Thirty five year old Gittens of the Ivy, St. Michael was arrested at the QEH while covering the arrival of the injured from the bus accident in St. John.

Gittens appeared before magistrate, Deborah Holder and bail was fixed at one thousand five hundred dollars. He is expected to return to the District A Magistrates court on July 11th. Attorney at Law Michael Lashley appeared on behalf of Gittens. The law firm of Carrington and Sealy, employed by the CBC is also examining the case.

One of the attorneys says there are plans to file a counter suit against the Royal Barbados Police Force arising out of the incident.

Members of the journalism fraternity are also reportedly planning a protest.

From The Nation News (link)…

Pressmen Roughed Up At QEH

NATION PHOTOGRAPHER Antonio Miller arrived at the Queen Elizabeth (QEH) around 8 p.m. following a report that injured passengers in a two-bus collision were being transported to the A&E Department for medical attention.

He was confronted by security personnel who ordered himoff the compound, saying it was a restricted zone and there should be no photographs or video footage taken in the area.

Miller did not leave, and half of an hour later, three uniformed police officers arrived on the scene and instructed him alsoto leave the area.

“I identified myself as a media photographer and pointed out that I was not obstructing any proceedings and was just trying to do my job,” Miller said.

At this point, the police began to forcibly remove two photographers (Miller and Jimmy Gittens, a contract photographer with the Caribbean Broadcasting Corporation (CBC)) from the area, and subsequently arrested and charged Gittens.

Neither Miller nor Senior Associate Editor Tim Slinger –who was also on the scene and manhandled – was arrested
or charged.

Slinger arrived on the scene just after 9 p.m. when he too was confronted by lawmenabout his presence there.

“I explained to them that I was a journalist covering the bus accident. But they [police officers] completely ignored my explanation and ordered me off the compound as well,” Slinger said.

“They held on to me,” Slinger said.

Because of the police action, neither CBC nor the SUNDAY SUN was able to get any photographs of the arriving casualties. Thirteen people were injured in the accident.

When contacted, Acting Commissioner of Police Bertie Hinds said: “I am still looking into the matter. That’s all
I can say. Come Tuesday, I will be more apprised of the situation.

“If it needs an investigation one will be carried out,” he added.

Publisher and Chief Executive Officer of the Nation Publishing Company, Vivian Anne Gittens, said last night that the company was concerned that the police’s action against personnel from the NATION could possibly be seen as a threat
to Press freedom.

“My information is that our reporter and photographer were not obstructing the work of the police, but simply doing their job. I am anxious to see if there will be an internal police investigation into the matter.”

A CARIBBEAN BROADCASTING CORPORATION (CBC) CAMERAMAN was arrested and charged, while two NATION media personnel were manhandled by police officers at the Queen Elizabeth Hospital (QEH) on Friday night.

The incident occurred when the media converged outside the QEH’s Accident & Emergency (A&E) Department to report on casualties arriving from a Transport Board bus accident at Bath, St John.

Jimmy Gittens, a contract photographer with CBC, appeared before Magistrate Deborah Holder in the District “A” Bridgetown Court yesterday charged with trespassing on the QEH’s compound.

Gittens, of Mayers Road, My Lord’s Hill, St Michael, was granted $1 500 bail after pleading not guilty to the offence and will return to court on July 11.

After his appearance, the photographer spoke of having to spend the early hours of Saturday morning in a prison cell before he was eventually released on personal bail around 3 a.m. at the Central Police Station.

Lashley said he was surprised by the action taken against his client by police, and called for Press freedom legislation to be enacted.

He hinted that his client would possibly pursue criminal and civil action against the Royal Barbados Police Force.

“There is some ground for cross charge and obviously we will send whatever correspondence on Tuesday to the COP [Commissioner Of Police] concerning this incident.

“I also call for a Freedom of Information Act because we definitely do need some sort of legislation to allow the Press to do what is necessary once their actions are within the parameters of the law.”

CEO and Publisher of the Nation Publishing Company, Vivian-Anne Gittens, said last night that the company was also concerned that the police action against a NATION reporter and photographer, who were carrying out their duties in a public area, could possibly be seen as a threat to Press freedom.