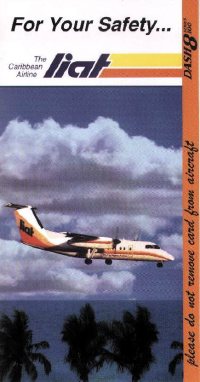 On the same day that the Caribbean Society of Hotel Association Executives says that the LIAT/Caribbean Star merger will result in fewer seats and higher airfares, our industrious friend Adrian Loveridge does some research at the LIAT website and discovers that the only reasonably low air fare is on the Barbados/St.Lucia route where American Eagle will shortly be operating.

Interesting how people have to keep pointing out what everybody knows: monopolies in anything result in price gouging.

OCCUPANCY IS ON THE decline in regional hotels, an independent survey has revealed

A decrease in the first two months of this year, in comparison to the same period last year, was among findings by the Smith Travel survey at the annual Caribbean Society of Hotel Association Executives leadership conference, held at the Hilton Barbados yesterday.
During the conference, some of the factors singled out as being responsible for the general downward trend were the impending LIAT/Caribbean Star merger, the CARICOM special visa, and the high cost of travel to the region.

Director-general and chief executive officer of the Caribbean Hotel Association, Alec Sanguinetti, said the merger would be the “worst thing” for the industry and would “destroy” tourism.

… continue reading this article at The Nation News (link here)

Having just paid an incredible US$459 for return air travel between Barbados and St. Maarten, a total of 840 miles with Caribbean Airlines, I was attracted by the colourful LIAT ‘ads’ appearing in the local press headlined ‘get a hair raising deal. 40% off all (h) air fares’.

Conditions clearly state that the last booking day was yesterday (18th May) and travel must take place between May 30 and 7 June, 2007.

So I then tried to book ONE seat through their website on any of their destinations.

Below is a list of the lowest available airfare on any flights operating on those particular days.

Airfares are from Barbados, return, shown in US$ and include all applicable taxes.

The only real ‘bargain’ appears to be travelling to St. Lucia where ironically enough their Minister of Tourism, Allen Chastanet, has just announced that American Eagle will shortly be operating a Barbados/St. Lucia/Barbados service.

So is it mere co-incidence that airfares have been pitched lower on this route, and if more competition was introduced on other routes then lower airfares would become the norm?

In cricket, perhaps more than any other game, there are times when your patriotism for the nation that bore you is overtaken by patriotism for the greater nation of cricket. It felt like that as I watched England seizing an inexorable control over the first npower Test match at Lord’s. It wasn’t the fact that they gained a decisive advantage; it was that they did so without playing terribly well.

And that seemed to me to be a terribly sad thing. I longed for West Indies to do better: take wickets, get ’em hopping, hit a few people, work up a little fear. Perhaps this longing comes from the idea that the game matters more than the results, that cricket has a beauty, a symmetry and even a moral purpose that other games cannot match. But really, I think it comes from the terrible fragility of the sport of cricket.

… continue reading this article at the Times (link here).

The British press and opposition are upset because their Deputy PM John Prescott is spending 15,000 pounds for a “farewell” trip to Barbados to “mark the 200th anniversary of the end of the slave trade”.

That’s nothing compared to the waste in Barbados! Pick a project, any project. Look at the initial cost estimates, then at the end costs that the government will admit to – let alone the true costs.

Fifteen thousand pounds is nothing in Barbados.

from the Daily Mail…

A final fling for Prescott – it’s in Barbados and costing taxpayer’s up to £15,000

John Prescott is to visit Barbados on a “farewell tour” as Deputy Prime Minister.

The trip – which will cost the taxpayer up to £15,000 – is billed as marking the 200th anniversary of the end of the slave trade. Yet it will be seen as little more than a final sunshine break for the gaffe-prone Mr Prescott who has been accused of enjoying the high life at public expense.

… continue reading this article at the Daily Mail (link here)

I was surfing the net and came across an article about Japan struggling with crime and social changes.

Whatever you think of Japan, my first thought is STABILITY.

I’ve flown into Narita International Airport a hundred times. I have been turned away from hotels because I am not of the proper race. I have paid US$20 for a coffee and a sweet. I have seen miniature Japanese women dressed as customs agents grow wide-eyed as I descend the rear airstairs of a 727. (I am twice their height) and I have even seen a Tokyo “tube” apartment. (A living space of 7 feet wide by 12 feet long containing a “living area/bed” and a toilet/shower)

In twenty years of touching down in Japan for a day here and a day there, for all their faults I remain attracted to the Japanese.

Japan. A society where everything is in it’s place…

… except, things are not so stable anymore.