The New Mugabe: Hugo Chavez Will “Nationalize” Venezuelan Chicken Farms If Farmers Refuse To Sell Their Product For No Profit 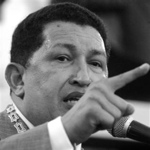 Steel, petroleum, telecoms, electricity, oil – like any good communist, Hugo Chavez has taken them all.

Now that those horrible farmers are refusing to work and slave to sell their products for nothing under government regulated pricing, Chavez is going to fix them… by simply taking their farms…

“Some people are trying to create a food crisis,” said the president, in response to criticism of shortages of a number of products in the market. “If they do that, I will go after them too. If chicken farmers and ranchers refuse to take their animals to the slaughterhouse, we will seize the cows within the framework of the constitution and the country’s laws.” (from Caribbean360.com)

This reminds me of an old definition I heard somewhere. Here it is from memory…

Before the communists came, our family owned a cow. We each took our turn getting up early before school to milk the cow. Mum would use some of the milk for our family, and the rest we sold.

Then the communists came and told the us that the cow belonged to everybody, and that we would have to give them all the milk each morning. We were forced to line up for a cup of our own milk in the afternoon – when there was any at all. On most days there was none for us because we were late lining up. We couldn’t line up with everyone else because we were busy milking “everyone’s” cow.

My father finally said, “If the cow is owned by everybody, then everybody can milk it.” We stopped getting up early because what was the use?

Soon “everybody’s” cow stopped giving milk because nobody milked it.

The communists learned of this, took the cow away and slaughtered it. We never received any of the meat, and the village never had milk again because all the cows stopped giving milk.

And that is Communism explained.

12 responses to “The New Mugabe: Hugo Chavez Will “Nationalize” Venezuelan Chicken Farms If Farmers Refuse To Sell Their Product For No Profit”