Who Will Get The Duty-Free BMW Autos? Barbados Government Contract Conditions Exposed As Sham 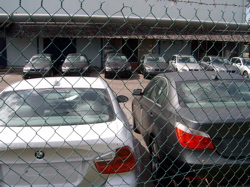 The Government of Barbados agreed to waive duties for the top-of-the-line BMW cars imported for Cricket World Cup, but the condition that the government imposed upon the deal with Warrens Motors is absolutely unprecedented in the history of independent Barbados…

“In exchange for a 35 per cent waiver of duties, Warrens Motors had to agree not to sell the cars to any members of its staff or their families, any members of the Local Organising Committee (LOC) for CWC or their connections, no Government ministers or their relatives or no other members of Government after the tournament.”

While this unusual condition might be associated with preemptive damage control for the whole Cricket World Cup fiasco (ie: Somebody in government said “We don’t need any further allegations of corruption associated with CWC so impose these re-sale restrictions this time”), the fact that they were imposed for the first time highlights that previous duty-free auto deals had no such conditions.

The contract also shows that the government is now having to pay attention to the increasing demands by citizens that government officials and their families and associates stop profiting from their positions of control and insider knowledge.

Importing new autos into Barbados is an expensive proposition, and is made even more so through the imposition of duties and taxes that can almost triple the price of an auto when compared with other jurisdictions. Total duties on new autos start at about 150% and can reach as high as 200% depending on the purchase price.

Although information about duty exemptions and reductions is not published by the Barbados government (golly, I wonder why? 😉 ), it is well known that many “special situations” have been approved by the Owen Arthur administration. Sometimes the availability of duty-free autos is used as a perk for certain government officials and insiders. As an example, judges are provided with duty-free government cars and are then able to purchase them after a few years. Oh yes… they get a $35,000 interest-free loan to help them along too!

“Ordinary” citizens pay up to triple the price for autos compared with “connected” government insiders and their families and friends, so it can be seen that the arrival of almost 100 sparkling new duty-free BMWs on Barbados is a big deal.

Why Did Government Impose & Publicise This Contract Change?

The ability and willingness of the Owen Arthur administration to hand out rewards of duty free autos like candy – or to withhold them as a punishment – is indicative of a culture of corruption that permeates the Barbados government from top to bottom.

And, as we saw with the recent rammed-through changes to our constitution, the government IS the law – so what is illegal on Monday can be made legal on Tuesday and then changed back whenever the need arises. The Owen Arthur government is despotic in it’s ability and willingness to do as it pleases – so why the sudden change of rules involving these specific BMW autos?

Nothing Has Changed: The Resale Restrictions Are A Sham – Only To Fool The Public

With the growing citizen awareness and disgust of how government insiders arrange things to personally profit from their public positions, the Owen Arthur administration tried to preempt criticism by using The Nation News to make a public announcement of the unusual contract conditions. The government was saying “See folks. We’re honest here. No perks THIS TIME for us government bigwigs.”

The resale restrictions are all about “looking good” – not some new ethical standard by government.

True to it’s lapdog traditions, The Nation News regurgitated the government’s propaganda without asking any questions or digging any deeper. (“Yessa massa!”)

Had anyone in the lapdog media thought about it, or had any courage, they would have seen through the government’s sham, because…

It Is Still Not Against The Law For Government Insiders To Obtain These Autos… And They Will!

First of all, the government has not said how many of these fine luxury automobiles it will be acquiring from Warrens Motors. Earlier media reports indicated that the government would have first opportunity to purchase these vehicles, and indeed we have heard that government insiders started jockeying for position even before the autos touched Barbados soil.

Many of these autos will find their way into government service – purchased or leased by the government for favoured insiders. This is a neat trick that doesn’t violate the contract restrictions, but still allows the government to hand out treats to friends. After the standard 3 years, government officials will be allowed to purchase “their” duty-free BMWs. Because the sales restriction is against Warrens, no laws will be broken.

The Sneakiest Part Of The Sham Is This…

Warrens’ sales restriction puts the onus on the seller, not on the buyer.

Even if Warrens were to break the contract agreement and knowingly sell to a government insider’s nephew or friend, no law would be broken. It would simply be a civil contract dispute because the government of Barbados has not implemented any conflict of interest or integrity legislation.

So you see, folks… nothing has changed.

The government will not impose any restrictions prohibiting insiders or their families and friends from acquiring these duty-free BMWs because that would open up a whole can of worms about integrity and conflict of interest legislation.

And if there is one thing that the Owen Arthur administration doesn’t want, it is integrity and conflict of interest legislation.

BMWs Rolling Out For Cup

BMW Deal Up To Government

Who Will End Up With These Barbados Cricket World Cup BMW Autos? Pick Me! Pick Me!

28 responses to “Who Will Get The Duty-Free BMW Autos? Barbados Government Contract Conditions Exposed As Sham”