A trusted source informs Barbados Free Press that Caribbean Splash Waterpark Developer Matthew Kerins was in Barbados last week for a series of secret meetings about his waterpark project. Mr. Kerins requested to meet with senior government officials, but in the end met only with an intermediary who delivered a message from the Owen Arthur government…

“Wait until after the election”

The American developer first requested the new meeting early in January of 2007, after he became angry over the Christmas holidays about delays and inaction regarding his land use permissions. According to our source, Kerins feels betrayed that he has paid over US$2 million in “consulting fees” to various Barbados “consultants” and has yet to receive permission to build – especially after a “very pleasant” meeting in 2005 with Mr. Leonard Nurse and Prime Minister Owen Arthur wherein the Prime Minister confirmed Mr. Nurse’s advice to Kerins that the waterpark should be built at Graeme Hall.

Mr. Kerins’ recent meeting had been delayed for a number of months as he presents a real “sticky wicket” for a government facing an election in the next while. There is a popular resistance against the waterpark at Graeme Hall and area locals have collected over 6,000 signatures on a petition against the development. Widespread negative publicity about the waterpark, plus a general backlash against large scale developments in Barbados has made open support for the waterpark political suicide for a government that is on the ropes with many constituents.

Many believe that if the waterpark development was given public approval prior to the election, the area BLP incumbents would not be secure.

Says our source… “They (the government) wish Kerins would go away, but he has, unfortunately, paid all those ‘consulting fees’ and was at one point given assurances by no less a person than the Prime Minister himself. That in itself is another sticky wicket should Mr. Kerins decide he has been unfairly treated.”

As a stopgap, Mr. Kerins has been asked to revise the water use estimates using newer desalination and water-recovery technology, but this is primarily a delaying technique by a government that is trapped between a rock and a hard place. Mr. Kerins has also been advised to keep a low profile and especially to avoid the media. 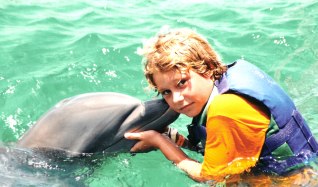 What Matthew Kerins Does Not Know

Our source also advises that preliminary approval for some additions has been given to one of Mr. Kerins competitors – Ocean Park Marine Aquarium. Ocean Park had requested permission to build a small waterslide and also to construct a major dolphin exhibit. The dolphin exhibit would include shows of trained animals and a “swim with dolphins” feature that has proven to be a major money-maker and tourist magnet at other parks worldwide.

While Ocean Park’s waterslide approval is “on hold” primarily because it would be unseemly to grant approval to Ocean Park while saying no to Mr. Kerins, senior staff at Ocean Park have been told to gear up for the dolphin swim feature.

Says our source, “Kerins has heard the rumours (about the dolphin swim) but he would go ballistic if he knew that preliminary approval has been granted. Have fun!”

Is The Caribbean Splash Waterpark Dead?

Our source states that Mr. Kerins has been told to wait until after the election and that a newly elected government would be in a much better position to grant permission for his project – especially with a revised proposal that includes newer water-recovery technology.

So we asked directly if the Caribbean Splash Waterpark project is dead. Our source replied, “Kerins is on the mat, but only until the next round.”

61 responses to “Source: Caribbean Splash Waterpark Developer Told “Wait Until After The Election””