Greenland Dump Project Doubles In Cost Overnight – And That Figure Is Still A Lie! 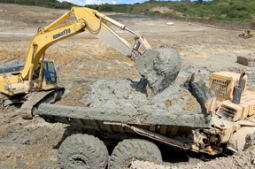 It looks as if the construction is going full bore at the Greenland Dump in what was to be Scotland National Park. The Nation News is quoting some government hack “who spoke under the condition of strict anonymity” – but doesn’t interview anyone opposed to the dump. This extra $20 million doesn’t include costs for a number of things necessary but yet to come – so like we always say: You ain’t seen nothin yet, folks!

Not a word about landslips or soil shifting in the Nation News article: only positive spin from the government.

Another $20m on Greenland

Highly placed sources in the Ministry of Health yesterday confirmed the price tag on the contract, which is being executed jointly by Barbados’ largest construction firm, C.O. Williams Construction, and British builders McArdle.

The latest sum, when added to the approximate $20 million spent on the site before engineers deemed it unfit to receive garbage, means that Barbadian taxpayers will end up paying more than $40 million for the state-of-the-art garbage disposal site.

However, the official noted, by the time the project is completed it will be considerably larger and better prepared to ensure there is no negative environmental fallout as opponents of the project have been warning against.

According to the official, who spoke under the condition of strict anonymity, the new Greenland landfill will be about 33 per cent bigger than the original design and equipped with a modern system for channelling and collecting leachate, utilising many tonnes of stone imported from Canada last year.

It would not be an exaggeration to say the landfill will feature an improved design, with all the necessary infrastructure to ensure it is safe and efficient,” the official said…

… read the entire story at The Nation News (link here)

16 responses to “Greenland Dump Project Doubles In Cost Overnight – And That Figure Is Still A Lie!”