The United Nations General Assembly has voted to express “serious concern” about a long list of human rights abuses in Iran and to call on Iranian authorities to ensure full respect for such rights. The resolution was adopted on December 19, 2006 by a vote of 72-50, with 55 abstentions, in the 192-country assembly. Before the vote, Iranian diplomats unsuccessfully tried to block the resolution.

It criticizes Iran’s justice system, which it says has “persistently failed” to meet international standards, and expresses concern over the use of torture and cruel or degrading punishment such as flogging and amputations.

Must Be OK by Barbados: Torture, Floggings, Amputations, Discrimination & Violence Against Iranian Women

Take a look at the above photo of 16 year-old Ateqeh Rajabi being publicly hanged in the city centre of Neka, Iran on August 15, 2004 for the “crime” of having sex with a man she was not married to. The man was lashed and then released – after all, he’s a man so therefore it must have been the girl’s fault for “tempting” him.

Our gutless Barbados government and their diplomats at the United Nations obviously have no problem with this or the long list of standard human rights violations by the animals who run Iran. Barbados abstained from voting to cite Iran for torture, floggings, amputations as punishment, discrimination and violence against women – and executions of children like Ateqeh Rajabi.

THEN… after the vote against Iranian Human Rights Violations passed…

Barbados Voted To Protect Iran From Sanctions Over Human Rights!

After the UN Motion citing Iran for Human Rights Violations passed, the question “Now what should the UN do?” had to be pondered. This time, Barbados got right into the fray and voted that “no action” be taken against Iran.

Here is the record from the United Nations website (link here)…

Vote on Human Rights in Iran

The no-action motion concerning draft resolution IV on the situation of human rights in Iran (document A/61/443/ADD.3) was not adopted by a recorded vote of 81 against to 75 in favour, with 24 abstentions, as follows:

(Do a “find” for Barbados and you will see the two motions regarding Iran – Barbados abstained on the censure motion, then backed Iran on the motion to take “no action” against Iran for Human Rights violations)

BBC – Execution Of A Teenage Girl

Women And The Death Penalty In Modern Iran

So, what do you think?

Barbados Public Buildings Crumbling Due To Lack Of Maintenance

THERE is a certain type of person who buys a new vehicle and then never changes the engine oil. We’ve even seen some ZR owners who fall into that category – but not many. The ZR chaps know that if they fail to change the oil or keep those tyres aligned, they will end up paying big time in the long run, and that money comes right from their own pocket.

Contrast the behaviour of most ZR owners with those public servant so-called “managers” who have access to a never-ending pot of public tax money. Why bother to maintain something when you can just buy a new one? Unfortunately though, that pot of tax money now has too many hands grabbing at it – so another flock of chickens (called “the results of never caring about preventative maintenence”) are coming home to roost.

A large number of Barbados public buildings – including the police stations, post offices and schools – have not been maintained over the years, and have had to be abandoned as being unfit for both employees and the general public.

One of the most recent cases is the police station in Belleplaine, St Andrew, in the Scotland District National Park. After part of the ceiling and roof collapsed, the police have had to relocate to Speightstown, leaving a skeleton crew on site. Next door to that is the post office, the welfare department and the community centre. All of these buildings are closed and in an advanced state of delapidation through a lack of maintenance.

Wrong Priorities For Spending – Parties Instead Of Maintenance

Recently government spent over Bds $1/2 million to celebrate the 40th anniversary of our independence. This included food and drink and cultural events at the Prime Minister’s residence, Ilaro Court. Well-dressed invited guests arrived in designer clothes, paraded themselves before the cameras – but then carried away doggy bags and took home dainties for family and friends.

Then there was the official opening of the west wing of the Parliament Buildings in Bridgetown, both the Heroes Museum, and the Museum of Parliament, which being unfinished has been closed from public viewing since the official opening. Kensington Cricket Oval has been re-built at a cost of Bds $137 million, with the seating having been increased from 14,000 to 26,000 of which 10,000 is a temporary bleacher stand to be removed at the end of the series.

This is a 2 forward/2 back example of mind boggling waste of public money.

The new Coast Guard station at the Flour Mill site which was to cost $60 million is now costing $80 million, and the designers seem oblivious of the fact that about 20 years ago when heavy seas came out of the north-west, the waves broke over the existing breakwater and nearly took away the flour mill. The facility was saved only through a Herculean effort by C.O. Williams Construction, using large boulders that were pushed into position with bulldozers – between lulls after a wave frequency of 7 huge waves and a break before another 7 smashers.

The retrofit at the Greenland garbage dump site is another example of having wasted $30 million, and another $25 million is due to start the retro fit. This is without overruns, which more than likely will bring it up to $37 million.

The Barbados press, newspapers, radio, television are failing in their public duty to keep the public informed of these short-comings. Every time a Minsiter or politician opens his mouth and brays, the press are there to report. Our historians of Cave Hill never come out and publicly condemn this irresponsible action. The Auditor General’s report year after year, which documents these financial shortcomings of taxpayers money, is received by the Speaker of the House of Assembly, minuted in Hansard and put on the shelf with the other unresolved shortcomings, since 1966.

The motto of government seems to be… Don’t Stop the Carnival!

Death Boat Victims To Be Buried In Barbados

Everyone on Barbados has been following this story ever since a drifting boat full of bodies was found by fisherfolk 75 miles off Ragged Point on Saturday, April 29, 2006. Much of the story will never be known, but each of us can imagine the last days of these poor folk who were only seeking a better life for themselves and their families.

Ten unidentified bodies will be buried in Westbury Cemetery, St. Michael at a later date. One man’s body was identified. Diao Souncar Dieme left a note for his family, and his body will be taken back home to Senegal. Authorities estimate that there were originally some 52 people on board – all of whom perished. The boat left Cape Verde Islands off western Africa last Christmas Eve – bound for the Canary Islands.

“Interpol’s forensic experts have established that the men died from dehydration and starvation, but their names and identities remain unknown..”

Earlier, there were news reports that one man had been arrested in Cape Verde in relation to the deaths. It was said that the human smugglers who set up the journey abandoned the boatload of migrants to their fate in order to avoid a police patrol.

You can access all previous Barbados Free Press stories on this topic… (link here).

Barbados Free Press received a message from a little Nation News mouse this morning, that went something like this…

“Back in November your blog put up a piece on murdered slaves being an insurance claim for lost cargo. The boss saw it and a week later had permission to publish the article you originally sourced. Thanks for the story idea…”

Hey mouse, we missed that entirely. Thanks for the heads-up!

We have no problem with The Nation News using some of our material or story ideas. After all, we draw upon their stories all the time – practically every day.

… But we always give them credit and a link for our readers.

This is the sixth or seventh time we are aware that the Nation News has directly followed our lead (ie: wasn’t a coincidence according to mouse), but I guess we shouldn’t expect the Nation News to let their readers know that their editors and staff faithfully read Barbados Free Press every day. (Hi guys!)

Now if we could only get The Nation News to pick up on some of our corruption stories and investigate them professionally like a real newspaper would in Britain or the USA. Dream on…

November 26, 2006 – Barbados Free Press: When Murder Wasn’t A Crime – Only An Insurance Claim For Lost Cargo

Rihanna, Simon Cowell … and Cliverton In Barbados For Christmas 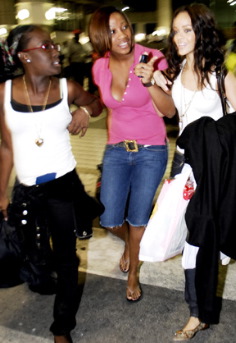 Thousands of homeward bound Bajans and folks who only wish they were are arriving this week for Christmas in Barbados. The Nation News ran the above photo of Rihanna arriving at Grantley Adams International Airport, and from Contact Music we hear that Simon Cowell and girlfriend Terri Seymour will also be spending Christmas on the island.

Lost in all the excitement is that BFP’s own Cliverton is now back with us for two weeks of sun, fun and mayhem.

Lock up your daughters!

(Good to have you home again, Clive)