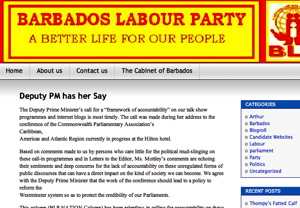 FREEDOM OF SPEECH AND BLOGGING

Here is the BLP Blog wording; “We agree with the Deputy PM that the work of the conference (Commonwealth Parliamentary Association- Caribbean) should lead to a policy to reform the Westminster system so as to protect the credibility of our Parliaments.”

Amazingly this did not produce the same shocked reaction that Miss Mottley’s own words did. No attempt is made to explain in what way the “credibility of our Parliaments” is endangered by unfettered expression. What does “credibility of our Parliaments” mean exactly? Has frank comment on call-in shows caused our citizens to cease believing in our parliamentary democracy? I very much doubt it. What evidence is there?

Miss Mottley’s actual words are in part, as follows: “…For in the absence of that reform entities such as the call-in program which have no accountability to anyone and no modality to be able to ensure that there is transparency, or that there is indeed informed discussion- will continue to predominate.”

Miss Mottley’s meaning is hard to get to grips with because of the windy and bombastic way she expresses herself. Unlike Sen. Lynette Eastmond Miss Mottley seems incapable of speaking concisely and lucidly.

Whoever heard of such empty verbiage as “no modalities to be able to ensure that there is transparency”? Just look up the word “modality” and tell me what it means in this context. Meaningless rubbish!

If she meant “Call-in programmes are anonymous and unregulated and there is no way to ensure that statements made are accurate” why did she not say so?

Omitting the lengthy relative clause in the middle of her sentence, we have “Entities (call-ins and bloggers)…will continue to predominate.” “Predominate” is defined as “to exert controlling power or influence.” Is she seriously trying to tell us that call-in and blog comments are exerting controlling power and influence over our parliament?

Ms. Mottley is either deluding herself or exaggerating to the extreme for political intent.

If her party felt her words went too far, they could have tempered their support. Instead they come out in unqualified endorsement!

It is frightening to realise that the Deputy Prime Minister, slated before long to take over the reins of power, has bullied her party into accepting her inflated fears that healthy criticism poses a threat to the government of our nation.

What Could Bajans Expect From Prime Minister Mia Mottley?

The “reform of the Westminster system,” with or without the promised referendum, is likely to mean we are ruled by a President rather than a Prime Minister, with more autocratic powers. As the current Deputy Prime Minister, it is not inconceivable that Mia Mottley might someday end up being the President of the Republic of Barbados.

One regretfully concludes that behind her dictatorial rhetoric lies a threat to the civil liberties we cherish. If the public can see through the tsunami of portentous hot air to the veiled meaning of her words and sentiments they will feel the same way.

Our thanks to Barbados Free Press reader “M” for this well-written and insightful piece. M – if you’d like us to publish your real name – just drop us an email and we’ll credit you.