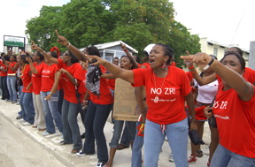 How many times have we all ridden a ZR where the music is too loud, no conductor – or a rude conductor, filthy seats and the suspension so shot that it makes you sick just looking at it? But we ride, because we have to. Or at most, we wait for the next one.

Government doesn’t think that public transportation is important enough to adequately regulate and supervise the ZRs… but not everybody just “takes it” anymore.

Some 200 UWI students were out in force protesting the passive complicity of a ZR driver and conductor in a sexual assault against two female students that happened on a ZR.

Good for the next generation, we say.

Now, if they can maintain their energy and outrage into their early 30’s when they discover that the government borrows against their future and then wastes or disappears the money…

Previous BFP story: We Could Use Less Of This In Barbados

“Government has got to be entrepreneurial in a climate of transparency and accountability, but it also has to know when to get out,”
…Barbados Minister of Transport Noel Lynch talking about selling the Hilton Hotel in The Nation News (link here).

We know he was only talking about selling the Hilton, but when Shona read the statement, she spilled her tea all down the front of her dress.

I thought it was pretty funny too!

“Missing Financial Papers” In Barbados Government Funded Organization – We Can Guess Where They Are!

Why is it that the Government of Barbados seems incapable of maintaining proper financial records for organizations that are supported by tax dollars?

From The Nation News (link here)…

CONCERNS have been raised over missing documentation, following the review of late financial records produced by Gymnasium Limited to auditors KPMG.

Gymnasium Limited has responsibility for the day-to-day management of the Garfield Sobers Sports Complex.

In the auditor’s report on the company’s financial statement for the period up to March 31, 2003, laid in Parliament just two weeks ago, it was noted that verification of certain assets was limited.

“Property and equipment from the National Sports Council was vested in the Gymnasium Ltd., the completeness and ownership of which is not susceptible to satisfactory audit verification due to the absence of relevant documentation,” the chartered accountants stated.

Financial Statements Behind Schedule “From The Outset”

Manager Ken Mason says the financial statements have been behind schedule “from the outset”.

Mr. Mason should be aware that when public money is involved, it would be “nice” if his organization kept proper financial records.

If memory serves, Mr. Mason is a long-time BLP supporter and has hopes of being the BLP candidate for St. Philip North. With this latest demonstration of his fiscal records keeping skills, St. Philip North residents can be assured that if elected, Ken Mason would fit right into a BLP government!

Where Are The Missing Financial Records?

Yes, folks, we can guess exactly where those missing financial records are…

They have been tucked away in the same same file folder that contains the GEMS Hotel Scandal financial records… and that file folder has been missing for some years now!