Time To Get Out Those Hurricane Shutters In Barbados

It’s just a little fella off the coast of Africa right now called “TD-8”, but the boffins with their sliderules, pencils and brushcuts say we should pay attention.

We are. Water, batteries, food, shutters…. I know we had something else on that list… Oh yes… Mount Gay! 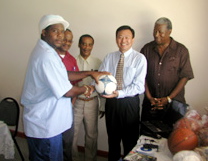 “If the Chinese government was kicking black folks to death in Africa, we might care – but it’s only them little yellow slant eyed Christians that are being abused… so where’s my new computer and football!”

Chinese Ambassador, Liu Huanxing says, “Here is your new ball, boys! Now run along and play. And forget that China is putting Christians in jail for merely possessing a bible or praying at home.”

Only in Barbados can the Chinese Ambassador hand out a football and in exchange receive glowing major news coverage – without having to worry about the national media printing anything about China’s human rights abuses.

Would Barbados Have Accepted Gifts From South Africa During Apartheid?

The Chinese are big enough and powerful enough that the words “Tiananmen Square Massacre” have never appeared in the Barbados media even on the June 4th anniversary of China driving tanks over people who just wanted to be free.

The Barbados media never mentions stories of (for instance) China imprisoning Christians or shooting men, women and children who were trying to stop their homes from being expropriated for an electricity plant.

Oh, there is just so much we can learn from the Communist Chinese – according to Hamilton Lashley, Government’s Advisor on Poverty Alleviation. We were going to put in some quotes from an article a propaganda piece in the Barbados Advocate, but we don’t have the stomach for it this morning. If you want to read how lucky we are that the Chinese are giving us a football and a computer, here is the link.

Meanwhile, we will just remind folks about some of the goings-on in China and how the Communist Chinese handle “Community Development” when poor folks won’t move out of their houses to make way for a new power plant…

And THAT Is How The Chinese Handle Expropriation for “Community Development”