In all the attention given to the victims of Muslim terrorists on 9/11 every year (and rightly so), the September 12th anniversary of Stephen Biko’s murder by police usually goes unmentioned. BFP’s Robert remembers though… 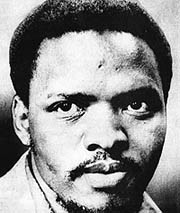 I was a child when he was murdered, so I did not know the name Stephen Biko until much later – when a White Jewish Zulu named Johnny Clegg joined an African band called Savuka.

Neither did I know the names Victoria Mxenge, Neil Aggett and so many, many more. Or about “banning” and other such things.

If you do not know of Stephen Biko, Victoria Mxenge, Neil Aggett or of a white Jewish Zulu (now there’s a combination!) named Johnny Clegg – and what each of them stand for, then I invite you to pass by the following links…