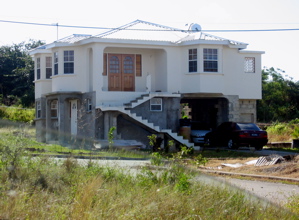 The house where the Barbados Minister of Public Works sleeps every night is built upon land that was originally expropriated by the Government of Barbados for “Public Housing”.

According to a BFP source, once the privately-owned land was seized by the government, the building lot then “somehow” passed from public ownership and into private hands again – through a magical process that is not altogether unknown in Barbados.

And now the Minister of Public Works for Barbados has a place to lay his weary head every night after his long days of selfless dedication to the common good.

Neighbours say that the Honourable Gline A. Clarke J.P., M.P., Barbados Minister of Public Works, has lived in the house since it was built, and that he can often be seen in the evening sitting on the front steps – surveying his domain while enjoying a cup of tea.

The house itself is a modern 2-storey design and like many of the nearby homes is still in need of final outside finishing and landscaping.

Minister Clarke’s polished Mercedes sedan is one of two autos that are parked at the home each night, and, (again according to the neighbours) the lady of the home leaves each morning slightly after the Minister and usually returns before he arrives home – so the Minister’s Mercedes is seldom in the garage. (A pity as such a magnificent automobile should be more protected from the hot sun.)

1. Privately owned land is expropriated by the Government of Barbados for “Public Housing”. (Under what circumstances, who made the decision and how much was actually paid to the landowners by the government is a whole other matter.)

2. Part of the expropriated land – a choice building lot – is then “somehow” transferred from public ownership to a private owner.

4. No Integrity Legislation exists in Barbados. As a result, powerful Government Ministers like Mr. Clarke do not have to declare their assets or explain how it is that, as a Member of the Cabinet that approves the expropriation of privately-owned lands, a Minister of Government comes to live upon a choice building lot that was forceably taken from an owner – using the full power of the Government.

This article was written using information provided by your fellow citizens. If any of the information contained in this article is incorrect, we want to hear about it from you.

We will publish, unedited, any response received from you, and we will ensure that your response stays at the top of the article and this blog so that you can speak directly to the same citizens of Barbados and visitors from around the world who read the original Barbados Free Press article.

We await your response, Mr. Minister.