I am a victim of shell oil leaks and I am mad as hell with the situation. Shell admitted that their lines were leaking from 1994 and not 1995. Their figures showed over 300 thousand gallons of jet fuel .

Three Ministers of Agriculture have presided in their ministries, since this oil leak into the ground water. The Prime Minister came to office in 1994. He knew about it and did nothing. Where is CERO on this matter of such a magnitude?

Farmers and their extended families are suffering from the negligence of Shell and the Government of Barbados.

Barbados Pipeline Rupture: Consequences For People, Not For Shell Oil 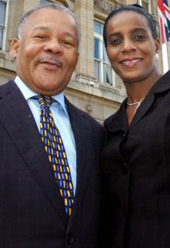 We said we would give the Prime Minister a week of peace – without mentioning words that upset him – words like “accountability”, “conflict of interest” or “Mia Mottley”.

The week’s grace is well past, but as a last gesture, we present this article from England… and, yup – they called Owen “Golf Mad”.

From Barbados to Brum for a honeymoon

WHO needs Barbados as a honeymoon haven when you can enjoy those first days of married bliss right here in Birmingham?

That’s exactly what Owen Arthur, the Prime Minister of Barbados, opted for after marrying his bride Julie on the Caribbean paradise isle only a week ago.

Instead of enjoying an exotic honeymoon location together they boarded a plane for Britain and are now basking in the warmth of a real Brummie welcome.

“It is marvellous to be here and Birmingham is a charming city,” said Mr Owen, who arrived in the city yesterday with his new wife and their six-year-old daughter Leah.

I know your weather hasn’t been too good recently but we’ve had a real warm welcome from the Birmingham people.

“We arrived here on Friday and left your Prime Minister Mr Blair enjoying his holiday in Barbados away from the hurly burly of British politics.”

Golf-mad Mr Arthur said this was his second visit to Birmingham. His first trip was in 2002 when he watched Tiger Woods in action at the Ryder Cup, staged at the Belfry.

He admitted that his marriage coincided with an earlier planned trip to Britain to promote a Barbados export goods and services exhibition in London.

But he added: “It’s a coincidence that my wife and myself are here right now but we’re delighted. Britain is as good a place as any to have a honeymoon.”

Mr Arthur was given a VIP reception at Birmingham Council House by council leader Mike Whitby and leading figures from the African Caribbean community including Pastor Calvin Young from Aston Christian Centre. Later he met a group of Barbadian nationals for dinner.

Coun Whitby said: “I would like to congratulate Mr Arthur on his recent marriage and commend his inspirational choice of honeymoon location.

“The African Caribbean population of Birmingham has, for many years, played a key role in helping to build the economic, social and political strength of the city. Their culture provides a colourfully distinct flavour to modern life.”