I couldn’t believe my eyes when I read the Nation News this morning.

As told to Sanka Price

WOMEN ARE SOMETHING ELSE! They are some of the biggest hypocrites in the world and some of the worst liars. They like to give people the impression that they are so nice and decent, yet they do the same things men do, or even worse.

And the worst women of all are those who call themselves Christians. These are the ones who appear more pious than anybody else, are most conservative in their dress, don’t get involved in anything that is not related to the Church, and thank the Lord for everything they want and get, however little.

You know the type? There are enough of them in Barbados in every district and workplace. All of them act as if they are holier than the Pope, but love to backbite and bad-talk other people.

I lived with one for six years and can give you chapter and verse on how they operate. I can tell you how they say pleasant things to people, especially when at church, but by the time they get outside and are heading to the bus stop or for their car, they make laughing sport at the same people. That is how hypocritical some of them can be….

…Believe me people, all this comes from some of these so-called Christian women.

I have to use the words “some” and “so-called Christian” because it is wrong to paint everybody with the same brush, but after living in this type of environment for six years and around such women for about eight, I am in a position to say what I said.

To explain what I mean, let me give you an idea of what I went through with my so-called Christian wife….

Read the rest at The Nation News (link here)

Whew! And that is before the editorial heats up. Amen, brother. Women like those sure do give good God-fearing women a bad name.

Which is why I wake up every day and the first thing I do is thank God for my woman.

Comments Off on Anti-Christian, Pro-Christian – or Just Outrageous In Barbados?

Wichita, Kansas might be a long way from Grape Hall, Barbados, but that hasn’t stopped a couple who love Barbados from turning their backyard into a bit of the island. Cyndee and Robin Pollock have made their pool house in the style of one of our chattel homes.

The Wichita Eagle (now, there is a name for a newspaper!) has posted an article on line. No photos of the “chattel home” but we will see if we can dig one up.

From “A Bit of Barbados”…

Cyndee and Robin Pollock retreat to a beach house in Barbados at least once a year. But they’re able to get the get-away feeling just by walking out to their backyard in Wichita, too.

They’ve decorated the inside of their simple brick pool house in Crestview in the bold colors of the chattel houses of Barbados.

Chattel houses are sometimes called the original mobile homes — they were built for plantation workers who often were forced to move from plantation to plantation and could take these tiny houses with them.

Today on the Caribbean island, many of the chattel houses have been converted to craft shops or expanded as residences.

Cyndee Pollock, president of Greenbrier Home & Garden in Wichita, couldn’t resist the charm of the houses, steeply roofed and gabled, with louvred windows and crotcheted curtains. When she and her husband were remodeling their pool house, they decided to mimic a chattel house.

… continue the article at The Wichita Eagle (link here)…

DLP Finally Says Something About Barbados Water Park – Sort Of… 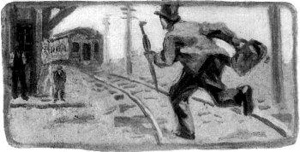 Train Pulling Out – DLP Dithers: Get On Board Or Not?

Somebody at the Democratic Labour Party must have realized that the “Save Graeme Hall Watershed” train was leaving the station with everybody on board and they didn’t want to get left behind on the platform.

Oh well – it is hardly leadership, but at least the DLP is now saying something about the proposed water park at Graeme Hall by American developer Mathew Kerins and his company, Caribbean Splash Inc..

Mind you, the DLP haven’t unequivocally stated that they are against putting the water park at Greame Hall. No Sir… that would mean that they would have to have an actual policy on something. So instead of communicating a clear position of opposition to the development, the DLP just released a statement calling for the government to answer questions about the proposal.

Yes, some of the questions in the DLP statement illustrate excellent reasons why putting a water park at Graeme Hall is a bad idea, but Bajans are still left without a straightforward indication as to where the DLP stands on the issue as a party.

Perhaps we are supposed to infer the DLP’s position from the questions they ask?

Sometimes I despair that we Bajans will forever be stuck between a corrupt government and an opposition party that has forgotten that leaders sit in the engine, not in the caboose.

The DLP statement notes that the two BLP Members of Parliament who attended the recent water park town hall meeting didn’t say a word. In truth, both Dr. William Duguid and Joseph Edgehill remained as silent as frightened school boys not wishing to incur their master’s wrath for speaking out of turn.

While we can appreciate their position of being between a rock and a hard place in terms of not wishing to say too much publically against their own government, the two gentlemen should be aware that for most of their constituents, the water park is a definitive issue.

Unless the water park in Graeme Hall is publically killed dead dead dead (ie: not just deferred until after the next election) – BLP candidates anywhere near the area will have a rough ride against any contenders who clearly oppose the Graeme Hall water park.

The DLP statement on the Caribbean Splash Waterpark was published in the Barbados Advocate (link here) and in the Nation News (link here).

Meanwhile, the Barbados Labour Party Blog tap-dances all around questions of whether the water park developer did meet with the Prime Minister, whether a written agreement of any kind exists between the developer and the government, and the clear statements made by Mr. Kerins that the location of Graeme Hall for the waterpark was chosen by the government.

Patrick Hoyos over at The Broad Street Journal published “The United States of the CWC” a few days ago. Well worth reading.

Here is an excerpt…

…You might think it unfair of me to muse, at this time of mutual rejoicing in our regional family ties, that none of this might have happened in our lifetime were it not for the solemn undertakings, not to mention, worldwide humiliation, that we would suffer as a region if we were to mess up the world cup.

I have said before and I proudly say again: the World Cup tournament will be flawlessly executed. It will be the best such tournament ever staged, and it will put the Caribbean on the world map for management of such events.

This will all come to pass because of two factors: 1) Caribbean pride and dignity, and every citizen’s willingness to bear any sacrifice and pay any price to see that it is so; and 2) the coming of the United States of the Cricket World Cup…

Read the full article at the Broad Street Journal here.

Comments Off on The United States of Cricket World Cup