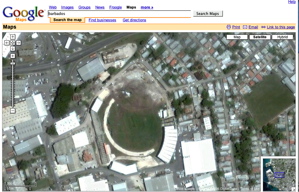 Above you can see the Kensington Oval under construction. Click on the photo to take you to the Google Satellite page and see if you can find your home. Shona did! (And yes, Honey, I see the old car in the yard. Yes, I guess I should scrap it. Sorry, baby.)

I haven’t tried to look at anything else yet (just discovered this a few minutes ago).

What a tool this will be!

Many thanks to Ryan at West Indies Cricket Blog and Global Voices Online for pointing this out.

Who In Barbados Received The Stolen Money?

A Bajan-born Manhattan USA lawyer has been indicted for stealing over US$1.6 million from clients – but who in Barbados received the stolen money?

Campbell Holder, 58, told police that he gave a good portion of the money away to relatives and friends in the USA and Barbados.

According to the A/P North Country Gazzette article here…

Many of the victims are members of the Bajan community in New York who hired the defendant specifically because he is from Barbados. Some of the victims included:

Two victims from Barbados are the beneficiaries of their son’s estate. The son, who lived in Brooklyn, had been an assistant manager at a Rite Aid in Brooklyn. Two years ago, the son had tried to stop a shoplifter inside the store and was stabbed to death. Holder was hired, based upon a referral from a friend, to handle the son’s estate. The defendant allegedly stole all the estate money, which totaled approximately $300,000.

The Associated Press article posted by North Country Gazette provides many more details, but doesn’t answer the question… Who in Barbados received the stolen money?