Children Seen Playing In This Raw Sewage On Beach 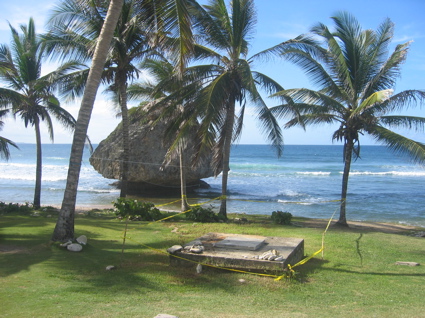 Yellow Tape Is Only Warning That Tourists Are Swimming In Sewage

For at least a year, raw sewage has been flowing ankle-deep from a public washroom onto the sand and into the ocean at one of the most popular beaches on the east coast of Barbados. Bathsheba Beach is world-famous for surfing and is a popular stop for bus-loads of trusting tourists during high-season. The Barbados Government-owned public washroom is converted from a 70-year old train station and has been used for years as a rest-stop for tour buses – whose passengers also dine and make purchases at nearby shops and restaurants.

Health Danger Kept Secret So As To Not Hurt Local Economy

Although local residents and business people say they have been begging Barbados Health Authorities to clean up the mess for almost a year, they have been reluctant to "go public" for fear of harming the local economy. One shopkeeper said he could no longer remain silent "in all good conscience" and contacted the Barbados Free Press with the details.

"The sewage has been going into the sea for at least a year that I am aware of, and there were meetings a year ago about it."

"The toilets were finally closed for the Easter time. Then tourists from the buses come door to door looking to use a washroom. People even let them into their homes because what are you going to do? We have had some meetings at the church but it is all talk talk talk and the children are still playing in sewage on the beach. Enough!"

When BFP staffers Robert and Shona walked Bathsheba Beach this past weekend, they confirmed that ankle-deep pools of sewage are coming from an obviously defective holding tank between the toilet facility and the beach – as can be seen in the above photos. The only warning of any sort is some yellow "caution" tape around the deepest of the sewage pools, but no signs indicate the nature of the problem or any health danger. Tourists and children were seen swimming, surfing and using the beach. One tourist did not even realize she was sitting in sewage-wet sand until the tape and sewage pools were pointed out to her.

In our opinion, this disaster and the cover-up goes beyond an environmental concern and enters into the area of criminal responsibility.

Who put up the yellow "constuction" tape, but no descriptive signs?

Who made the decision to close the public washrooms, but failed to protect and clean the scene?

Who in the Health and/or Environment Ministries has attended at Bathsheba but failed to close the beach and alert citizens and tourists?

Have any health studies of the locals be undertaken? What are the results?

All it will take will be one death or serious sickness attributed to human sewage at Bathsheba Beach and you just watch how quickly Cricket World Cup becomes the number two story in the foreign media – right after stories of polluted Barbados vacation beaches.

This type of third-world condition is becoming more prevalent in Barbados. It is a legacy of ignorant or uncaring public servants and irresponsible elected officials who care too little about the country's future, and too much about short-term profits, temporary fixes and "looking good".

This tourist did not realize that she was sitting in sewage until we told her. Red arrow points to the yellow tape seen in the other photos.

Bathsheba Beach Looks Like A Travel Brochure Photo… BUT…