If a country is going to be competitive in this new global environment, then it has to understand how to get more out of its inputs, which, therefore, means that the critical issue confronting the region is how we can become more productive, said the Minister.

He stated that management would play a critical role in enhancing this productivity.

…Full article at The Barbados Advocate.

Perhaps Mr. Mascoll could also give a lecture to the government workers responsible for repairing that road washout that has been waiting over two years?

THE PRELIMINARY INQUIRY into charges arising out of the burning of Glendairy Prisons continued yesterday minus the Press.

On Monday the special court presided over by Magistrate Deborah Holder got under way in a section of the prison at Station Hill, St Michael.

That session was opened to the Press, but yesterday when a news team turned up, warders at the gate said they had no instructions about allowing the Press in.

It was exactly one year ago, March 29, that fire broke out at the lone jail as prisoners began protests that ran for days. They were eventually shifted to different areas of the island before they were moved to the temporary location at Harrison Point, St Lucy.

Tip of the hat to Bim Today for pointing out that prison riots and murders of prisoners don't happen in the tourist haven of Barbados – so there is no need for the news media to cover this inquiry anyway.

Did someone say "Royal Commission Needed" ?

Comments Off on Barbados Prison Riot 2005 – Secret Inquiry Being Held

Barbados Chemical Dumping – What Would Jesus Do? 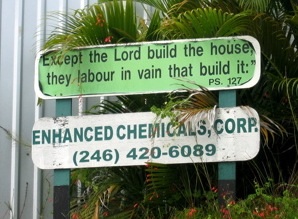 … is brought to you be the fine folks at…

As foreign visitors drive up to the industrial facility located in the middle of what was once a thriving Barbados sugar plantation, they are always surprised and remark upon the sign in front of Enhanced Chemicals Corporation's building…

Such an outward sign of faith is rarely associated with a typical business in North America or Europe, but is common enough in Barbados where the majority of the population are Christians of one sort or another. Sure, times are changing everywhere, but as a guess, one is probably safe saying that more Bajans pray than not.

But if most Bajans profess to fear the Lord, one has to wonder why the island is littered with discarded chemical and oil drums. When the Lord placed his creation in our care, is this what He wanted?

Abandoned chemical drums are everywhere in Barbados – in the fields, on the beaches, by the roadside and on hilltops in the middle of nowhere. As I write this, there is even an old rusted 55 gallon oil drum sitting on the green at Grantley Adams International Airport – and it has been there for months according to Shona's brother who makes deliveries in the area. (He jokes "Dey put de chemical drum at de airport so de tourists can see Barbados culture from the start.")

Many of these discarded drums are not empty – some contain considerable amounts of corrosive and poisonous chemicals. Some are even full of foulness – abandoned in the ditch so they become someone else's problem and cost.

But the Government of Barbados does not pick them up – so they sit for years and even decades in the rain and sun and salt spray until they burst or rust out. After a season or two, they can become invisible – covered by vegetation – waiting for some luckless child to become too curious as happened a few years back near Drax Hall Woods.

These chemical drums are dumped everywhere, but the Barbados Government does nothing about illegal chemical dumping. No education. Zero enforcement. No mandatory hazardous waste training programs. No inspections. None.

Not one environmental dumping charge has been laid in twelve years of Owen Arthur's stewardship… and the opposition DLP shouldn't be so smug because there were probably no charges laid when they were the government either.

The Barbados Ministry of the Environment does not have a program to recover these abandoned chemical drums.

What would Jesus do? Probably more than the Environment Ministry personnel who just drive right by chemical drums abandoned on the side of the road. Can the Barbados Government be embarrassed into action? Some have doubts, but we will keep trying.

We at Barbados Free Press are going to publish regular reminders to all – and especially to Environment Minister Liz Thompson – featuring some typical illegal chemical dumps on beautiful Barbados. Maybe then Minister Thompson will have her do-nothing environmental personnel go to the scene and clean up the mess one way or another.

Oh… and Minister Thompson? We'll be watching… so if your personnel just move the mess around, we will be in touch. Hopefully, you'll someday learn to hold your management team accountable. Hopefully. Someday.

… is brought to you be the fine folks at… 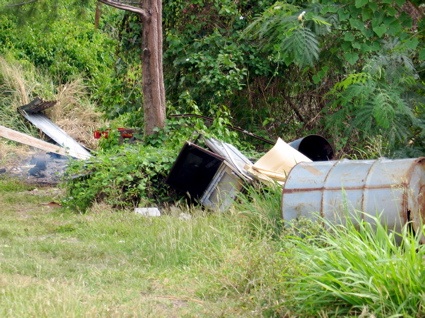