A few places of interest to Bajans on a Thursday afternoon…

Jdid at Doan Mind Me has some ideas about playing Race Cards.

I’m new to Barbados – I would describe myself as a Black person who happens to be biracial. I thought I would fit in really well here but I find that I am getting weird reactions from some people because my skin tone (similar to Halle Berry/ Sade/ Bob Marley) seems to be very rare in Barbados although it’s common in the US. Sometimes I get bad treatment from people who are darker than me; I also get really bizzare reactions from people who are a bit lighter than me (not white) who form another signficant group in this country.

I daren’t discuss it with anyone because Barbados is so small – everyone seems to know everyone here. Has anyone got any thoughts on this or is this too taboo to talk about?

Linda from Barbados Blog tells the story of a tourist who was frightened because a polite young lady on a crowded Bajan bus offered to hold her packages. That tourist musta been from New York City! (Chill out lady, not all of us who ride the bus are thieves.)

Titilayo from Gallimaufry Blog went up to St. James last weekend and took some photos of the roving tuk band challenging a kittle player to best them.

Linda from My Barbados Blog also posts on the Holetown Festival and has a link to last year’s story too.

(Our own Robert was very pleased with himself because Rhea – the new Banks Girl – gave him a smile at Holetown. My heart still pines for Shantelle from 2004…sigh…)

Neil Benn at Passenger’s Log risks the rath of his mother to talk about Hamsters Befriending Snakes and other “Tacky Politics”. Neil also talks about George Belle’s comments on call-in show Down To Brass Tacks. 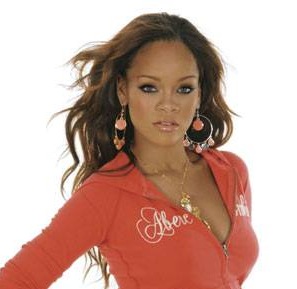 It has been just a year since Robyn Fenty, otherwise known as Rihanna (her middle name), signed her deal with the DEF Jam label. The home girl is doing so fine and just turned the big eighteen last Monday. (No, Shona wasn’t invited this time. Big tears.)

But Shona did hear some juicy news…

Rihanna’s second LP “A Girl Like Me” is due in April, but Shona says that a huge movie deal will shortly follow the LP. Big secret… Rihanna has been taking acting lessons big time since last October and showed real natural talent, so she was signed – but the plan is to put out the new album first, then bump up the publicity by announcing the movie deal.

Ok Shona: we are holding you to that girl!

For those three people who have been locked in a closet for about the past 12 months, Miss Fenty is known to the music world by her middle name Rihanna. In less than a year, she moved from an average Barbadian secondary school teenager to an international superstar proudly flying the Barbadian flag all over the world.

Rihanna’s DEF Jam website is here. A Google search will get you all kinds of goodies…. but nothing about the movie deal, so you read it first at Barbados Free Press.

And by the way… Shona also hears that Rihanna still remembers where she came from, and is still the same home girl inside, no matter all the lights and glitter. (We all knew that anyway)